5 Things You Need to Know About Terawih Prayers

A Complete Guide on Why, When and How to Do Terawih Prayers Welcoming Ramadan this year (2020/1441H) in light of the pandemic outbreak will certainly be a very different experience. As such, the current situation has drawn our concern as Muslims to start thinking about how we would thrive during the blessed month with varying measures to take.

Nevertheless, let us revisit one of the highly encouraged (sunnah mu’akkadah) practices during Ramadan which many are earnestly looking forward to every year i.e. the Terawih prayers. The Terawih prayers, amongst other rituals, greatly enliven the spirit of Ramadan. Such is the practice exemplified by Prophet Muhammad s.a.w. and his companions.

It is our religious commitment to ensure the right understanding of the rulings and the quality of the Terawih prayers. Here are 5 things that you will need to know about the Terawīh prayers to help us in fulfilling our commitment:

1) Merits of observing the Terawih prayers

Understanding the benefits of the Terawīh prayers would inspire us to observe these prayers more consistently and stay more focused. The Prophet s.a.w. said,

“Whoever prays during the night of Ramadan with īmān (faith) and in hopes of rewards (from Allah), his past sins will be forgiven for him.”

Nothing should be of greater importance for any Muslim than having his sins expiated as it contributes to acquiring eternal success and happiness in the hereafter. For this, the Prophet s.a.w. asserted that sinning is a human flaw,

“All the sons of Adam are sinners, but the best sinners are those who repent.”

Besides repentance, ḥasanāt or good deeds will also erase sins, and the Terawih prayers are among the most rewarding deeds a Muslim can observe. This is based on the Qur’ānic verse,

2. How to perform the Terawih prayers

The Terawih prayers are a form of night prayers (qiyām al-layl) as they are offered after the Ishā‘ prayers until before Fajr Ṣādiq (or the Subuh prayer time) sets in. They are done in 2-raka‘āt sets of prayers like the nawāfil i.e. the Sunnah prayers before or after the obligatory prayers.

The Terawih prayers can be observed either congregationally or individually, and the former is more recommended (mustaḥab). 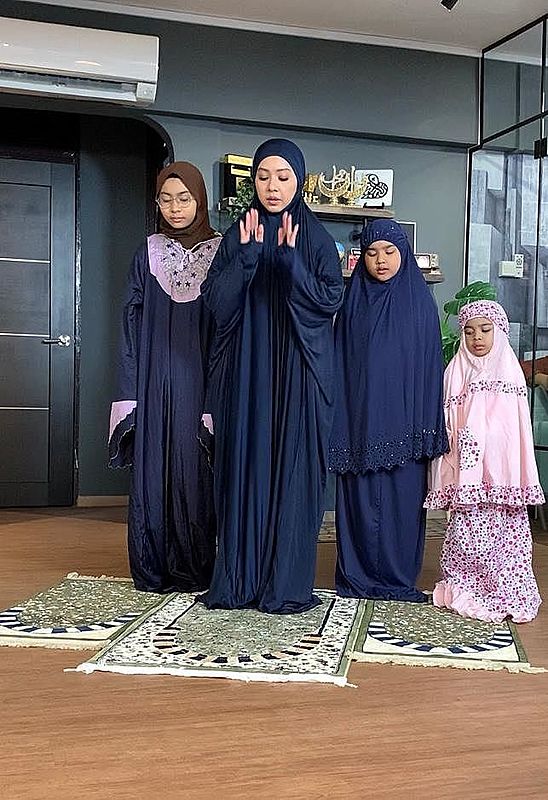 The intention to recite for Terawih prayer is:

The intentions to pray in congregation, however, are as follows. The one who leads the prayers as an imam would recite:

or in the case of being the makmum (follower):

Here is the step-by-step guide for Terawih prayer. Other than upholding integrals (arkān) and the prerequisites (shurūṭ) of the prayers, it is important to implement some etiquettes (ādāb) while praying:

Having the right niyyah (intention) is essential when beginning any form of worship. It should not only make a servant aware of the Creator whom he is praying for, but also assist him to acquire iḥsān in the prayer. Iḥsān suggests a high degree of contemplation, letting a Muslim immerse in his prayers or any form of ‘ibādahwith great sincerity and pleasure. In a ḥadīth narrated by Imam Muslim, the Prophet s.a.w. defined iḥsān as follows:

“To worship Allah as if you see Him, and if you do not see Him, He sees you.”

To achieve this, we should constantly remind ourselves of having the right intention. And secondly, strengthen our focus by understanding what we utter in prayer, and stay motivated by the great deal of rewards the Terawih prayers have to offer. Islam promotes both physical and spiritual purification in every aspect of life. This reflects our faith to some degree as the Prophet s.a.w. said in a ḥadīth narrated by Muslim,

“Purity is half of Iman (faith)”

Hence, a Muslim should observe his overall cleanliness in his prayers beyond wudhū’ that is part of the prerequisites (shurūṭ) of prayers. Allah s.w.t. says in the Qur’ān,

And in another Qur’ānic verse, Allah s.w.t. says,

“And (O Muḥammad) purify your garment.”

While observing our physical cleanliness, we should try our best to avoid an extreme precautious attitude towards it termed as waswās. Waswas leads to unnecessary habitual actions and other implications such as the inability to focus during our prayers.

Dressing well during Terawih as a sign of gratitude

While covering the ‘awrah (selected body parts that need to be covered) is a religious requirement, being in the best outfit for our prayers is admirable. If we wear nice outfits when meeting others, let us also be outwardly presentable in our prayers to show our gratitude for the blessings we are bestowed with. In a ḥadīth narrated by al-Tirmīzī, the Prophet s.a.w. said,

“Allah loves to see the sign of His bounties on His slave.”

The nice outfits we wear should mould us to be grateful and humble servants, and not motivate us to show off to others as that may bring about arrogance in us.

3) Number of raka‘āt for Terawih

The question of whether we should observe the Terawih prayers in eight or twenty raka‘āt (not inclusive of Witr prayers) has been a prolonged debate within the Muslim community. Either way has its valid bases. Therefore, no one should argue about it with the purpose of wronging others or, worse still, judging them for committing sins.

The ikhtilāf (scholarly difference) of which is better to be practised has been discussed by the past Muslim scholars. They not only understood the intellectual reasoning for the opinions they held but also implemented its etiquettes (ādāb) by agreeing to disagree, respecting and refraining from outraging others.

Those who agree with doing eight raka‘āt follow what the Prophet s.a.w. practised in particular as described by his wife ‘Āishah r.a. in a ḥadīth narrated by Imam Al-Bukhārī:

“Allah’s Messenger s.a.w. never exceeded eleven raka‘āt in Ramadan or in other months.”

The ḥadīth suggests that the Prophet s.a.w. consistently prayed eleven raka‘āt (inclusive of the three raka‘āt of the Sunnah Witr prayer) every night within and without Ramadan. Whereas the Terawih prayer in the twenty raka‘āt was first initiated by the Prophet’s companion ‘Umar ibn al-Khaṭṭāb r.a. during his time as the caliphate, as reported by a number of Tābi‘īn (followers of the companions).

Sā’ib ibn Yazīd said: ‘Umar ibn al-Khaṭṭāb r.a. gathered the people together in Ramadan to be led by Ubay ibn Ka‘b and Tamīm al-Dārī r.a. in praying twenty-one raka‘āt, and they used to recite hundreds of verses, and dispersed before dawn broke. The number of raka‘āt in different ḥadīth narrations varies; some state twenty raka‘āt, while others twenty-one and twenty-three. The reason why ‘Umar r.a. increased the number of raka‘āt—along with other initiatives in the prayer setting—is mainly to gather the Muslims then so that they optimised their time and effort during Ramadan with much ‘ibādah.

Having mentioned the reasoning of both views, we may conclude that whoever chooses to pray eight raka‘āt, he may do so, and whoever wants to pray twenty, or even more, he may do so too. Most importantly, we should put our utmost effort to perform as much ‘ibādah as possible, raising both its quality and quantity, during the month of Ramadan. It is also important that we equip ourselves with the best of akhlāq in our relationship with others.

Witr prayers are another form of the night prayers (qiyām al-layl). As Witr suggests odd numbers, these prayers are observed in odd-numbered raka‘āt i.e. one, three, five and so on.

The Witr prayers are usually offered as the last set of prayers in a night like after the Terawih prayers. The Prophet s.a.w. said,

“Make Witr prayer the last of your prayers at night.”

(Narrated by Imam Al-Bukhārī and Muslim)

In this regard, a question arises asking if we can still perform any prayers after we are done with the Witr prayers. This is a valid concern because in a typical situation i.e. after praying Terawih and Witr in a mosque, there will still be plenty of time if one intends to perform more prayers at home before Subuh.

This particular question can be addressed with the following:

“The Prophet s.a.w used to pray two raka‘āt after Witr in a sitting position.”

Based on this, there is no harm in observing more prayers after completing the Witr prayers on the same night. In fact, it is a commendable effort to keep uplifting our spirituality with much ‘ibādahthroughout nights of Ramadan.

As much as we long for Terawih prayers in the mosque alongside our Muslim brothers or sisters, that may not be possible temporarily. It is because the necessity to take safety measures due to the current coronavirus outbreak outweighs our longing for the congregational prayers at mosques or public spaces.

The Terawih prayers can still be observed in a congregation at home. Should anyone have any doubt in their limited recitations of other Surah of the Quran especially for those doing their Terawih prayers individually or in congregation as the Imam, it is fine to recite any Surah within their capacity such as Surah Al-Ikhlas, for example, although repeatedly. One may also consider holding a brief and small pocket Quran in prayer, bearing in mind to not extend to more than three major external (not relating to prayer) movements.

On a different note, this Ramadan could be an opportunity for us to learn other Surah and increase our appreciation and repertoire of reciting the beautiful Quranic verses.

In general, any prayer when done at home will lead to Allah’s blessings, especially for the one who performs it and bring goodness to the entire household. The Prophet s.a.w. said,

In fact, there is no need for online congregation such that we desire to pray with other congregants virtually, in order to establish the same spirit in mosques. The general ruling within religious scholars does not recognise virtual congregational prayers.

Besides the spiritual benefit that we may acquire from praying at home, let us take the opportunity to also foster our relationship better with our family members as a social gain. This will help us keep motivated despite our sadness, sorrow and other sorts of emotional pain for not being able to go to the mosque.

Some of us may not feel confident enough to pray or lead Terawih at home. However, please be assured that you can perform this prayer with your family members or your housemates at the comfort of your home. If you are unsure, you may reach out to our local Asatizah and ask any questions you have. You can also check out this Terawih guide featuring Ustaz Irwan Hadi and local celebrity Marina Yusoff and her family:

Lastly, let us strive to get the best out of upcoming Ramadan within the limitations we have and remain positive towards our Creator for the predestined challenges we are facing.