How To Pray Tahajjud and Perform Qiyamullail

What is Qiyamullail and what is the Tahajjud prayer? How and when is the best time to perform it? This article explores into some of the most asked questions about Qiyamullail and Tahajjud prayer
by Muslim.Sg 2022-04-26 • 20 min read
Muslim.Sg is a one-stop online media platform that aims to inspire and empower millennial Muslims with powerful and engaging Islamic religious content.
2022-04-26 • 20 min read

There are many merits mentioned in the Quran for those who not only believe and do righteous deeds. These include the acts of worship, especially that which is considered to be obligatory. Upon fulfilling what is sought by every individual, some would increase their capital with additional merits; the Sunnah acts of worship. 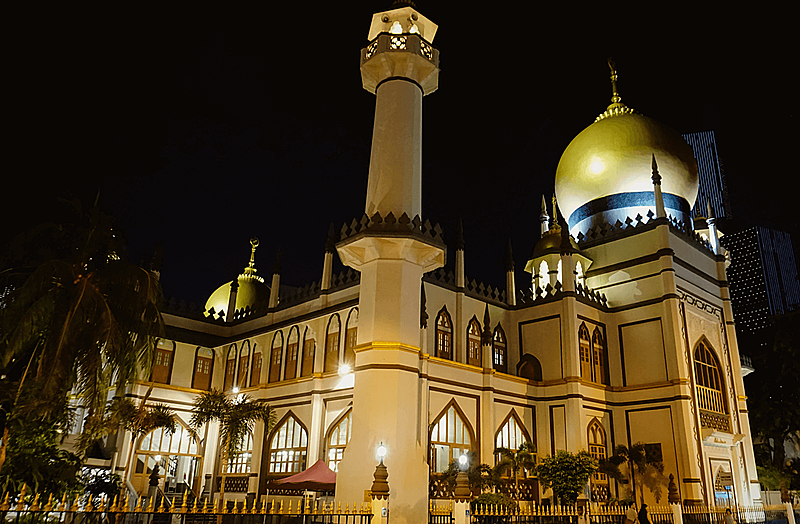 These additional acts of worship would help us to attain closeness with Allah s.w.t. and may very well even change the course of our lives, both in this world and the next. In fact, we are encouraged to invest a portion of the night to observe these Sunnah acts of worship. This is acknowledged by Allah s.w.t. Himself as mentioned in the Quran:

Indeed, worship in the night is more impactful and suitable for recitation. For during the day you are over-occupied (with worldly duties). (Always) remember the Name of your Lord, and devote yourself to Him wholeheartedly.

Investing our night with acts of worship may also help us develop sincerity in observing our deeds as there is usually no one else to witness our struggle and submission to Allah s.w.t. during the late hours. The deeds that are performed at night are known as Qiyamullail.

What is Qiyamullail and what are its merits?

Qiyamullail is to enliven the nights with any acts of worship such as the Sunnah prayers, recitation of the Quran or heartful invocations to Allah s.w.t.

Although Qiyamullail refers to standing in the night with acts of worship, it does not require us to spend the whole night itself to attain its rewards. It is fine to spend even a brief period of it. Allah s.w.t. says in the Quran:

stand at night (for prayer) except a little - half of it, or a little less, or make it a little more; and recite the Qur'an (properly) in a measured way. 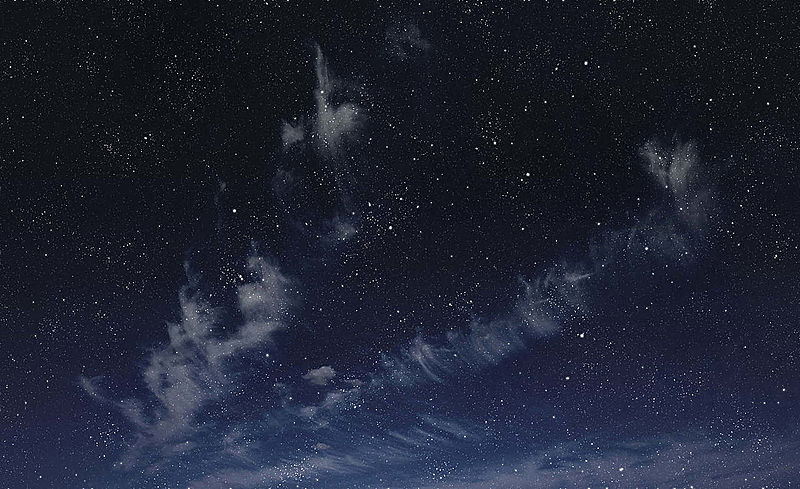 Observing the Qiyamullail would entail many rewards and merits. In a hadith, the Prophet s.a.w. said:

Hold fast to Qiyamullail, for it is the practice of the righteous before you, and indeed it is a means of nearness to Allah, a means of expiation for bad deeds, and a barrier from acts of disobedience

The Qiyamullail is indeed a life-changing experience that can be a means for repentance, redemption and opening the doors of provisions from Allah s.w.t. In another hadith, the Prophet s.a.w. said:

and in the hours before dawn, they used to pray for forgiveness

We may choose to wake up on either third of the night or even both. One of the many Sunnah acts of worship that can be performed is the Sunnah Tahajjud prayers or also commonly known within our community as Solat Tahajjud.

What is Solat Tahajjud?

and during the night wake up and pray, as an extra offering of your own, so that your Lord may raise you to a (highly) praised status. 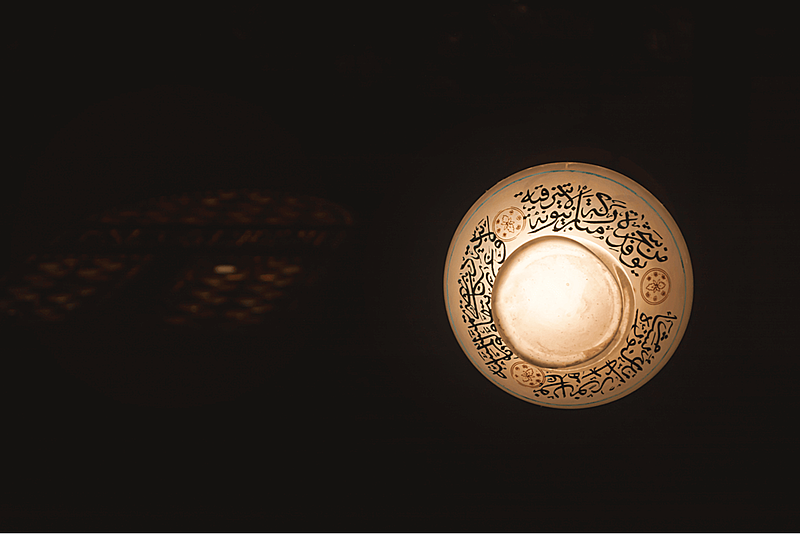 In the religious legalistic term, the Sunnah Tahajjud Prayer or Solat Tahajjud is a Sunnah prayer performed after observing the Isyak prayer and after (waking up from) a sleep even if it is a short nap.

As seen in the verse, Allah s.w.t. will raise those who are able to observe the Sunnah Tahajjud prayer in the hereafter.

What is the difference between a Tahajjud prayer and Qiyamullail?

Thus, according to this definition, the Sunnah Tahajjud prayer is part of the overarching practice of the Qiyamullail activities that is only performed if the person is preceded by sleep even if it is just for a short while.

While the above is the view according to the Syafiee Mazhab, there are also some scholars who do not necessitate sleep in order to perform the Tahajjud prayer.

How to pray the Tahajjud prayer and how many raka’at are there?

The Tahajjud prayer is just like any other Sunnah prayer. It is a minimum prayer of two raka’at as mentioned by the Prophet s.a.w:

When any one of you gets up at night, he should begin the prayer with two brief raka’at 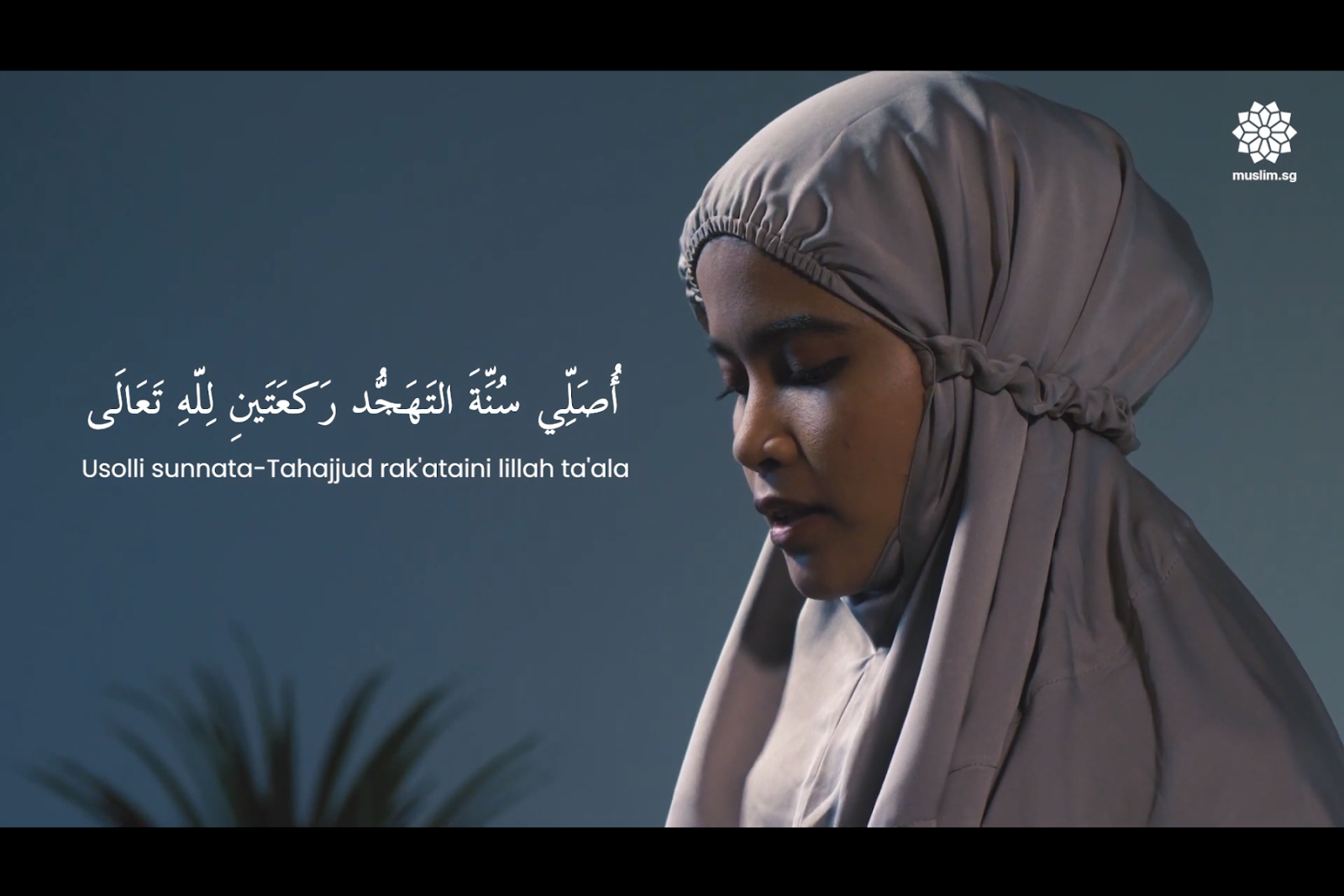 1. The Sunnah Tahajjud prayer starts with reciting the Niyyah (Intention) to pray:

I intend to pray the Sunnah prayer of Tahajjud two raka'at for Allah s.w.t.

2. Give the Takbir (Takbiratul-Ihram) and perform a two raka’at prayer
3. End the prayer after two raka’at with salam. 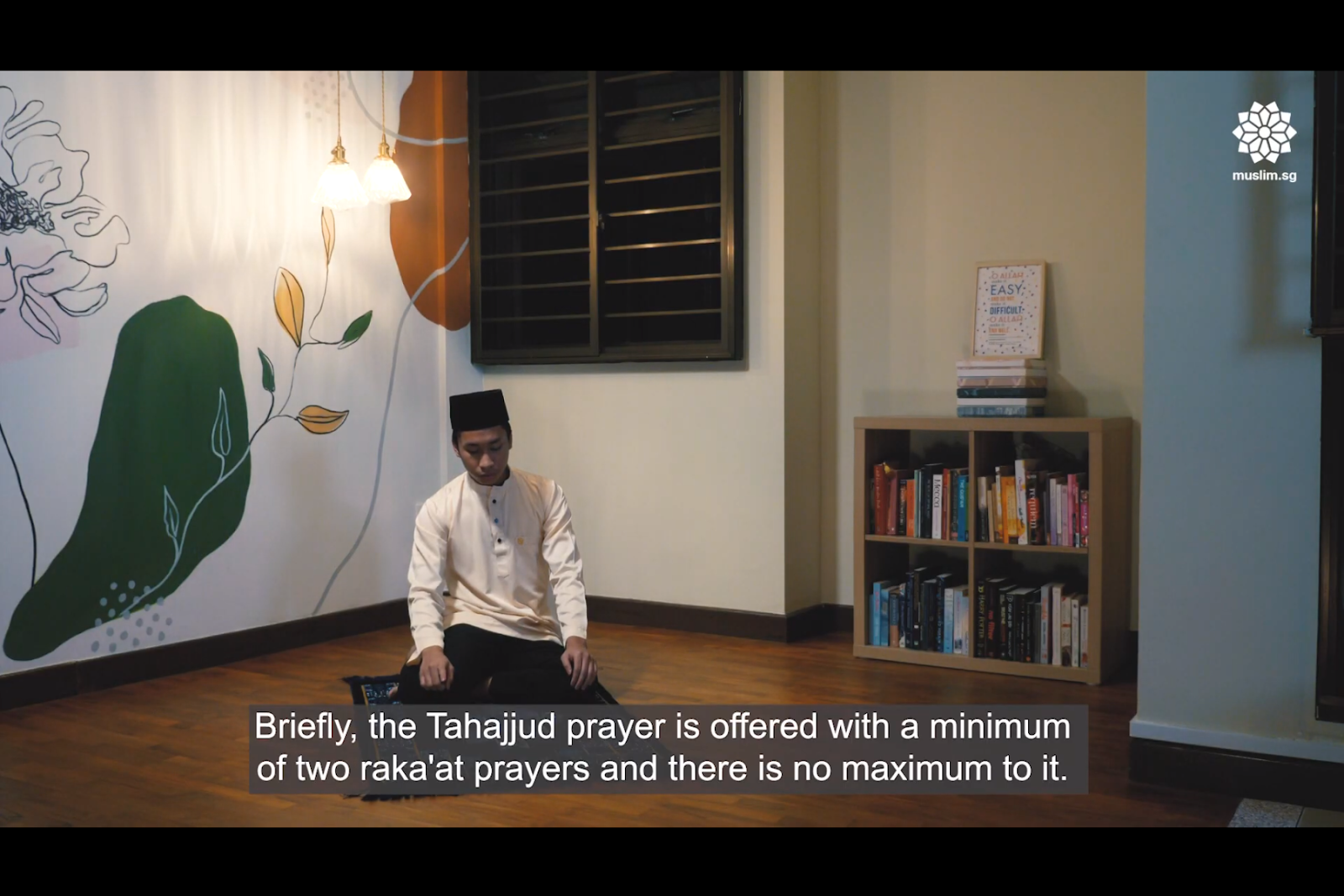 The maximum number of raka’at for the Sunnah Tahajjud prayers is not limited to any specific number. You may perform as many you want, as long as it is done in pairs. Should you wish to pray 4 raka’at of Sunnah Tahajjud prayer, for example, you may not perform it with 4 raka’at successively without any intervals of salam like the Isyak prayer. In other words, you will have to perform the salam at intervals between every two raka’at. The Prophet s.a.w. said:

Are there any specific supplications to make for the Tahajjud prayer?

Upon making the Tahajjud, we may invoke Allah s.w.t. with any heartfelt supplications, even that which is never expressed and deeply reserved in our hearts. Dua is a special and exclusive conversation between us and our Lord.

However, there are some narrations of the Prophet making this Dua for us to benefit and learn from:

What other Sunnah prayer can we observe to enliven the night with Qiyamullail?

If we have not had our sleep yet to perform the Tahajjud prayer, we may also observe the Sunnah Qiyamullail prayers. These prayers are also casually known amongst many as ‘Solat al-Lail’ or  ‘Solat Malam’.

Additionally, you may wish to observe the Sunnah Taubah prayer (repentance), Sunnah Hajat prayer or Sunnah Istikhara. All the mentioned Sunnah prayers are of two raka’at just like the Sunnah Tahajjud prayer, which entails bountiful rewards of its own if performed.

After performing any of the mentioned Sunnah prayers, you may wish to end the night with the Sunnah Witr prayer or Solat Witr.

Solat Witr is a Sunnah prayer that is done after the obligatory Isyak prayer. Although the Witr prayer is not obligatory, the Prophet s.a.w. never missed it. He once mentioned in a hadith:

Indeed Allah is Witr (One), and He loves Al-Witr, so perform Al-Witr O people of the Qur'an

Witr is a prayer with the raka’at of odd or uneven numbers. Its minimum raka’at is one while its maximum number of raka’at is eleven. Even if the minimum number of raka’at that we can perform is only one raka’at, it is not encouraged to normalise it. Thus, our scholars view that the more complete minimum raka’at for the Sunnah Witr prayer is three. It goes the same should we intend to increase the number of raka’at. For example, if we intend to pray 5 raka’at, we can pray in pairs - of two raka’at followed by another two raka’at - with a salam after each pair and then finally concluding it with one raka’at.

Can the Tahajjud prayer still be performed if the Witr prayer has already been observed?

Although it is prefered for the Sunnah Witr prayer to be considered the concluding prayer of the night, one may still perform the Sunnah Tahajjud prayer after it. The Prophet s.a.w. said:

Make Witr as your last prayer at night

Hence, if we’re unsure if we will be able to wake up before Subuh or in instances where intend to continue the Witr prayer right after performing the Sunnah Terawih prayers, we may still perform the Sunnah Tahajjud prayer after it. The Prophet s.a.w. mentioned:

What if I’m not able to wake up before Subuh to pray the Tahajjud prayers?

If a person finds it hard to wake up at night for the Tahajjud prayer, one may consider filling in the night with Sunnah prayers or other worship activities before heading to bed. As mentioned, Qiyamullail does not require one to precede sleep.

One may also consider establishing the intention or ‘Niyyah’ to wake up for Tahajjud prayers before sleep. That also means making the right preparations like setting up the alarm clock or sleeping early. Never underestimate the significance of good intentions. If a person is still unable to wake up before Subuh, he/she would still have attained some of its rewards due to the intentions. 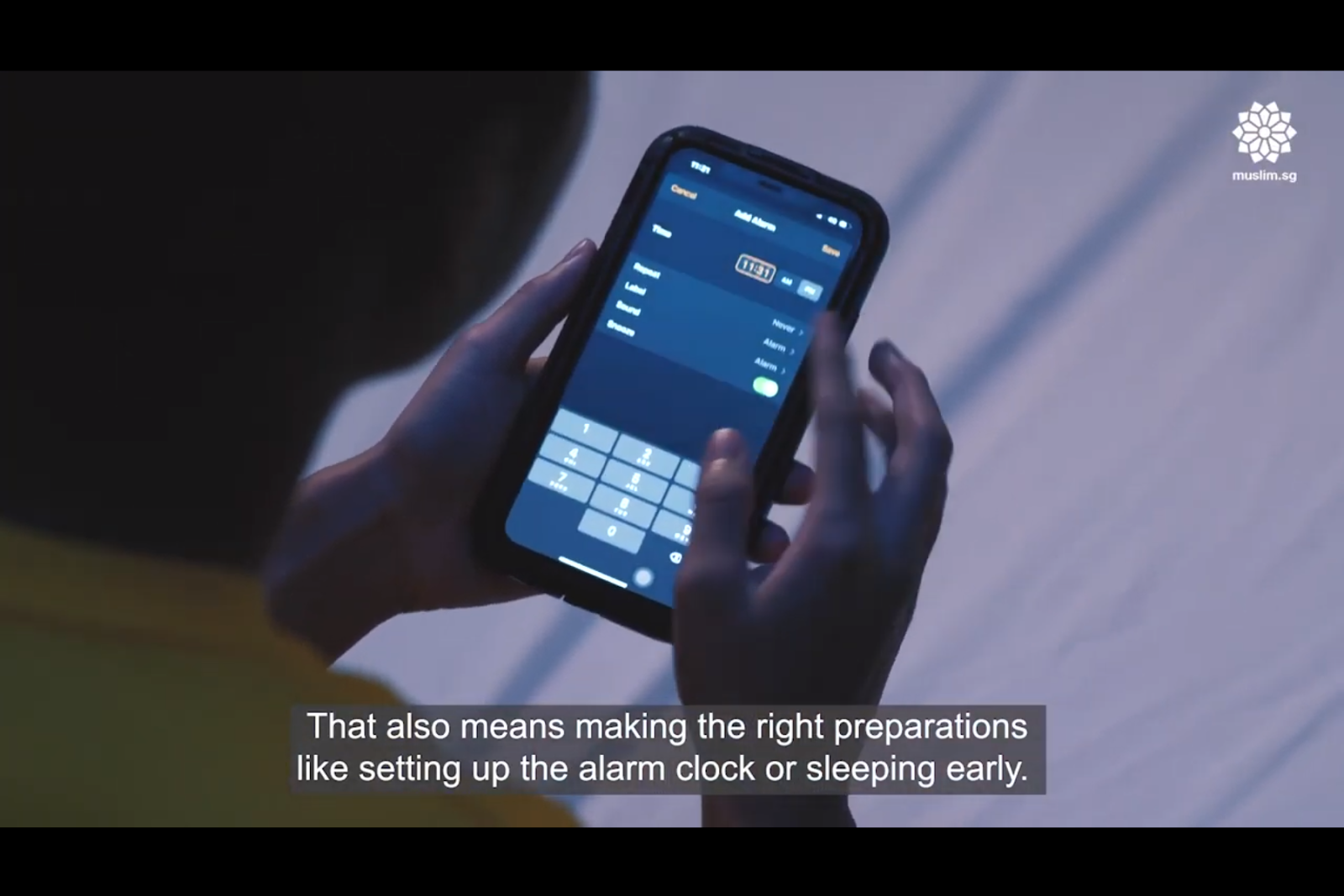 If we managed to wake up before Subuh, but find it hard to leave the bed and what more to stay awake, then we may consider reciting Zikir and invoke upon Allah s.w.t. the wishes of our hearts. It may be that by these considerable efforts, we are finally able to wake up before Subuh and pray Sunnah Tahajjud prayers.

Amongst many other ways of attaining its rewards, we may also consider praying both the Isyak and Subuh prayers in congregation even at the comfort of our homes. This is based upon the hadith of the Prophet s.a.w.

May Allah s.w.t. allow us to perform all the leads to His pleasure and may He accept all our deeds.