Why Is Muharram Celebrated and Other Muharram FAQs The dawn of 29th of July 2022 marks the Common Era (CE) date for the start of the new Hijri year, 1444H. Named after the event of the Hijrah, the Hijri Calendar witnessed the epic journey of the Prophet s.a.w. from Makkah to Madinah, which was later chosen to mark the beginning of the Islamic Calendar.

However, why is it based on the Hijrah and not other significant events? Did the Hijrah actually took place in Muharram at the start of the year? What is the merit of Muharram? Is Muharram an unlucky month?

We asked our Muslim.Sg Instagram followers what they want to know about Hijrah and Muharram. Here are 7 questions which were asked: Did the Hijrah happen in Muharram?

According to sources such as Sirah Ibn Hisyam[1], the Hijrah or Migration did not happen in just one day. It was a series of events which began when the Prophet s.a.w. left Makkah in the month of Safr, and then arrived in Madinah during the month of Rabiul Awwal. It is thus, worth mentioning that the Hijra did not happen on the 1st of Muharram. Even if the Hijri calendar was named after it, in truth, it was termed so due to different reasons.

What is the speciality of the month of Muharram? Muharram is celebrated due to a number of reasons:

1. The first is that it is the first month and it marks the new Hijri year. It is the first of the 12 months of the Hijri Calendar. The said months in chronological order are as follows: Muharram, Safar, Rabi’ul Awwal, Rabi’ul Thani, Jamadil Awwal, Jamadil Thani, Rejab, Sya’ban, Ramadan, Syawal, Zulkaedah and Zulhijjah.

2. Muharram is also known for the merits and rewards that entail from the act of fasting. The Prophet s.a.w. mentioned in a hadith:

The best prayer after the prescribed prayers is a prayer offered in the middle of the night. The best fast after the month of Ramadan is fasting in the month of Allah, Muharram.

We are, therefore, encouraged to participate in voluntary (Sunnah) fast as part of the good deeds we can look forward to at the start of the new Islamic year.

3. The month of Muharram is known for its 10th day, also known as Ashura. It is the day when Prophet Musa a.s. saved his people from the tyranny of Firaun (the Pharaoh). Upon learning this, the Prophet s.a.w. invited Muslims to participate in the fast. The companion Ibn Abbas r.a. recorded:

When the Prophet came to Madinah, he found (the Jews) fasting on the day of Ashura. They (the Jews) used to say: "This is a great day on which Allah saved Musa and drowned the people of the Pharaoh. Moses observed the fast on this day, as a sign of gratitude to Allah." The Prophet (then) said, "I am closer to Musa than them." So, he observed the fast (on that day) and ordered the Muslims to do so as well.

Read: Doa Awal Muharram and 3 Other Simple Acts For Muharram

Is the month of Muharram an evil or unlucky month? This is definitely a misconception. Unfortunately, this is probably due to a historical tragedy that have happened particularly on this month. A single event cannot be generalised for the whole entire month. In fact, there is no bad omen in Islam. Our Prophet s.a.w. cautioned us against superstition. He mentioned in a Hadith:

“There are no omens, but the best of it is optimism.” They said, “O Messenger of Allah, what is optimism?” The Prophet said, “A righteous word one of you hears.”

Considering ‘bad omens’ is actually an ignorant practice that was rather prevalent during the Jahiliyyah period. Aishah r.a. narrated the Prophet s.a.w:

The people of ignorance (of the Jahiliyyah period) used to say bad omens are in women, houses, and animals.

The Prophet s.a.w. loved a hopeful and positive outlook towards life. When he witnessed the appearance of a new moon, which marks the start of a new Hijri month, he is narrated to have said:

O Allah, let this moon appear upon us with security and faith; with peace and Islam. (O moon!) Your Lord and mine is Allah. May this moon bring goodness and guidance

Contrary to the said question, the month of Muharram is, in fact, one of the 4 sacred months in Islam. This is clearly mentioned in a hadith:

The division of time has turned to its original form which was current when Allah created the Heavens and the Earth. The year is of twelve months, out of which four months are sacred: Three are in subsequent Zulkaedah, Zulhijjah and Muharram, and (the fourth is) Rajab of (the tribe of) Mudar which comes between Jumada (Jamadil Awwal and Jamadil Akhir) and Sya’ban

Does fasting on the 10th of Muharram expiate sins for the past year and the coming year? 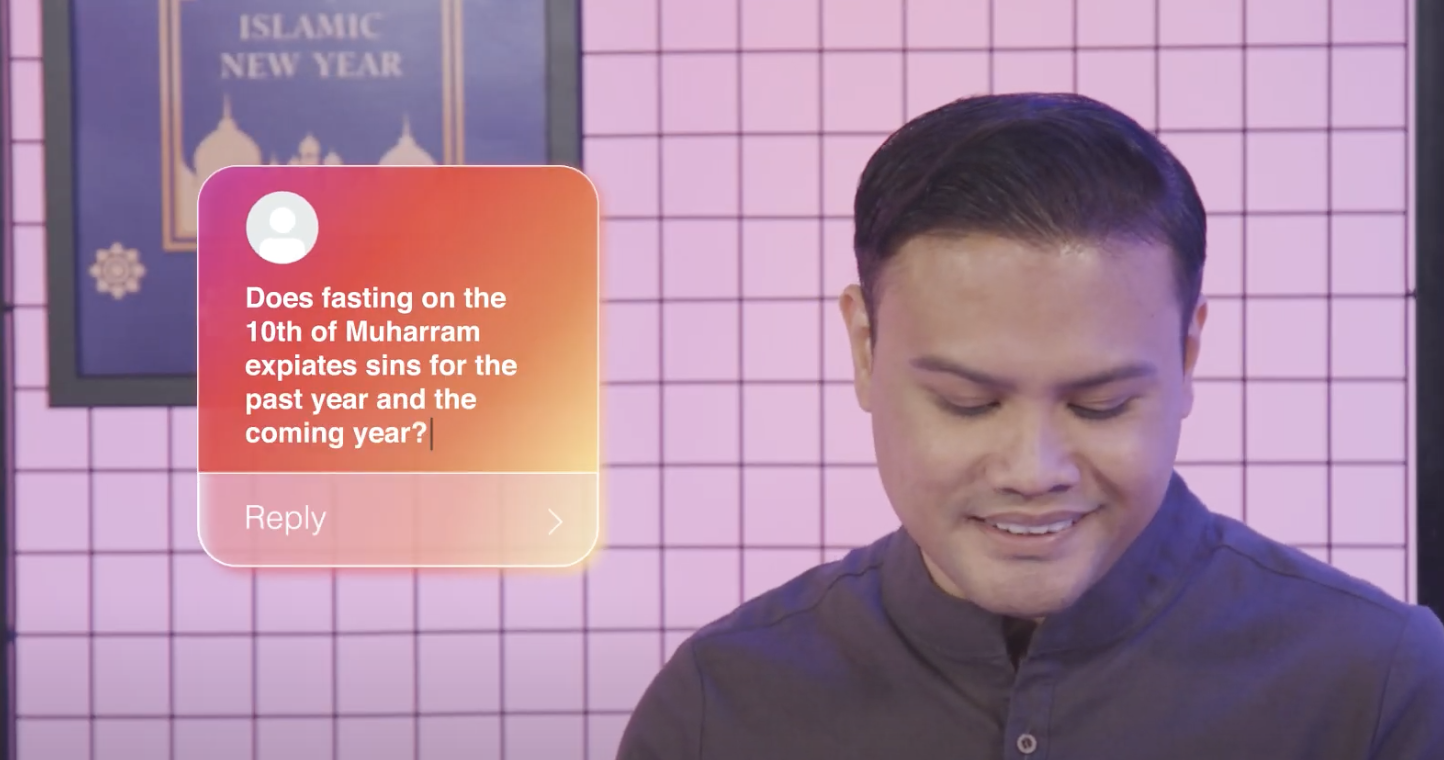 Fasting is indeed a virtuous deed that is especially sought after in the month of Muharram, especially on the day of Ashura. Ibn Abbas r.a. narrated:

I do not know Allah's Messenger s.a.w. singling out any day's fast and considering it more excellent than another, except this day (the day of Ashura) and this month, meaning the month of Ramadan

Unlike other normal days of voluntary fasting, the day of Ashura entails huge rewards - the forgiveness of sins and bad deeds made in the past year.

From the question posed however, people may have mistakenly percieve its rewards with the rewards of fasting on the day of Arafah. This is most probably due to the fact that both acts of fasting are mentioned in a single Hadith: The Prophet s.a.w. said:

Read: Fasting on the Day of Ashura

Is 10 Muharram a tragic day for Muslims?

While Muharram is celebrated for its merits, virtues and historical victories, some tragedies unfortunately happened during this month as well. In year 61 of the Hijri calendar, the beloved grandson of our Prophet s.a.w, Sayyiduna Hussein r.a, was martyred along with his companions and family members. As Muslims, we love our Prophet s.a.w. and his family members, the Ahl al-Bayt. Thus, we also share grief and sadness over the tragic event that took place on 10 Muharram.

What is the meaning of Hijrah?

Hijrah linguistically means migration or emigration. The term ‘Hijrah’ is often attributed to the Prophet’s migration from Makkah to Madinah, a physical journey that took place around 13 years after the Prophet s.a.w. first received revelation.

Unfortunately, this concept of Hijrah has been exploited by various radical groups. They call on Muslims living in countries governed by non-Muslims to take on the Hijrah of migrating to an ‘ideal’ caliphate that is controlled by them. This does not mirror the true essence of Hijrah.

Read: Reclaiming The Narrative of Hijrah

Beyond the physical journey, Hijrah fundamentally symbolises the strive to achieve excellence, a transformational journey to arrive at something better. In a Hadith, the Prophet s.a.w. explains:

A Muslim is the one who keeps (other) Muslims safe from his tongue and hands, and a Muhajir (the one who observes the Hijrah) is the one who migrates from what Allah has made forbidden upon him

In other words, the essence of Hijrah is about striving for excellence in all aspects of our lives and spreading goodness to all, regardless of race and faith.

How was the Islamic calendar formulated? Although the 12 months were prescribed in the Quran and were used by the Arabs during the pre-Islamic era, the Hijri calendar that we use to calculate the year was not yet present during the time of the Prophet s.a.w. In other words, there were no proper dating system to determine the year.

Read: Singapore’s approach to determining the start of the Hijri month

Instead, the Arabs recognised the year through identifying a significant event known by many, such as the year of the elephant, in recognition of Abraha’s invading troops that brought along war-trained elephants as part of his military campaign to conquer Makkah.

Later, during the time of Sayyiduna Umar r.a’s caliphate, he organised a council to formulate a formal calendar that can be used by the people and for administrative purposes. Upon the discussion, the council, mostly made up of the companions r.a, agreed to start and calculate the calendar from the time of the Hijrah instead of other significant events.

Because the concept of Hijrah involves striving to achieve excellence, this meant that every new year would symbolise the believer’s attempt to strive for excellence and achieve self-improvement.

Read: 4 Intriguing Things You May Not Know About the Islamic Hijri Calendar

The current world we live in is not always pleasent and joyful. Many are facing challenges, especially in during and post the pandemic period. As we welcome a new Hijri year, let us relook at the call of our pious predecessors to strive for excellence and continue to develop positive improvements wherever possible. They did not live a life of convenience, yet they showed us that achieving a fruitful outcome in a harsh environment is possible.

Our religion acknowledges all the struggles one may experience to arrive at a noble destination. Every effort is recognised and will not be put to waste. Although we may not see the outcome of our struggle yet, or perhaps we are unsure of our course in life, yet it calms us to know that Allah s.w.t. promises to guide us when we strive for His cause.

As for those who struggle in Our cause, We will surely guide them along Our Way. And Allah is certainly with the doers of good.

[1] Regarded as one of the earliest and most important sources of the Prophet’s historical biography (Sirah), the Sirah of Ibn Hisyam is the edited version and direct narration of what is known to be the first published book of the same genre - Sirah Ibn Ishaq, which unfortunately did not survive with time.