How To Perform Aidiladha Prayer at Home

How to Perform Eid Prayer at Home The blessed month of Zulhijjah is a month filled with blessings and rewards, yet it is often overlooked by many. ‘Zulhijjah’, which means ‘the possessor of the month of pilgrimage’, is when Muslims perform the Hajj. However, this does not mean those who do not perform the Hajj are of lesser significance or are not able to achieve the rewards of Zulhijjah. 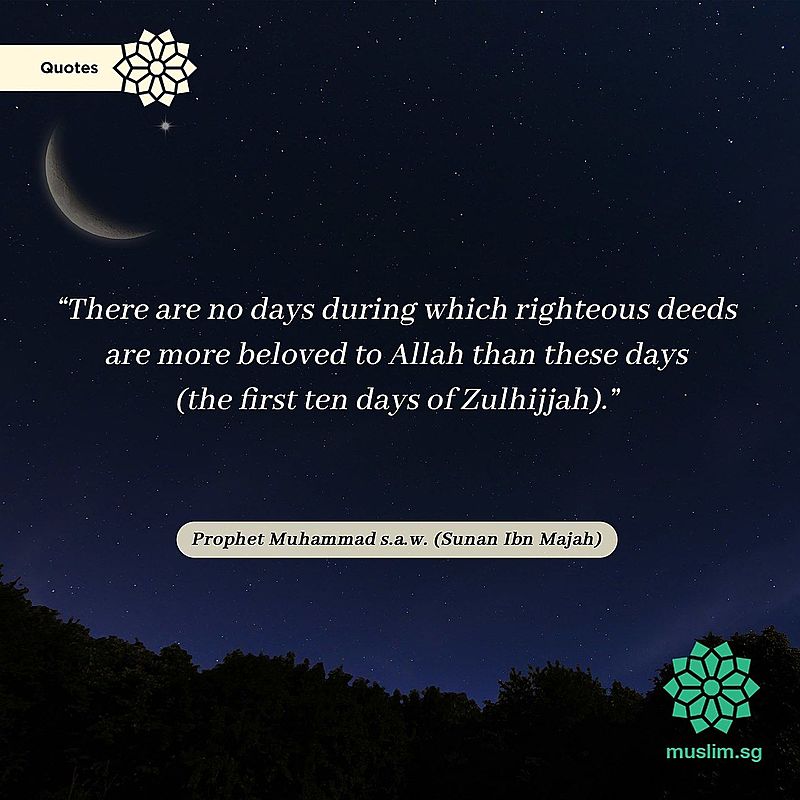 Just like the Sunnah Aidilfitri prayer, the Sunnah Aidiladha prayer is also considered to be one of the most highly regarded amongst other Sunnah Prayers (nawafil). Although it is not Wajib (Obligatory), its ruling is Sunnah Muakkadah (highly recommended).

The period to perform the Aidiladha Sunnah prayer is on the 10th of Zulhijjah when the sun has completely risen about 30 mins after Syuruq, which is around 7:30 am, up to before the time of Zohor prayer.

Many of us have been hoping that we could go to the mosque for Hari Raya Haji. Alhamdulillah, Muslims will be able to perform Hari Raya Haji prayers at 19 Safer Mosques with Pre-Event Testing (PET) and 47 mosques without Pre-Event Testing (PET). The limited spaces would allow congregants to perform prayers safely in three sessions. Office of the Mufti has clarified the religious position on joining congregational prayers from outside of the mosque.

If you did not manage to get a slot, we feel for you. It’s normal to feel upset or disappointed. Rest assured, Allah s.w.t. knows what is in your heart. If you have intended to perform Hari Raya Haji prayer in the mosque and tried your best to book a slot but were not able to, your effort would still be rewarded, insyaAllah. Indeed, Allah s.w.t. is Al-Karim, The Most Generous.

Thankfully, we can still enliven the spirit of Hari Raya by performing the Sunnah Aidiladha prayers at home which similarly entails bountiful rewards. Here is a step-by-step guide to performing the Hari Raya Haji prayer:

Establish the intention for the Aidiladha Sunnah prayer:

There are many benefits of congregational prayer.

If you are praying in a congregation, the intentions for Aidiladha prayer are as follows.

The one who is leading the prayer as an Imam would recite:

The Ma’mum (follower) will recite this intention:

I intend to pray the Sunnah prayer of Aidiladha as the Ma’mum (follower), two raka'at for Allah ta'ala

The following illustrations will guide you in praying in Jema’ah (in a congregation) at home: Read these guidelines for praying in a congregation. Say ‘Allahu Akbar’ while keeping your intention in mind.

Upon giving the Takbir, lower your hands gently below your chest area and put your right hand over your left. Recite the Dua Iftitah (opening dua) quietly only for the first raka’at:

Allah the Almighty, the Greatest

All praises be upon Him

Allah The Most Exalted of them all, day and night

Indeed my Solat, my good deeds, my life and my death are all for Allah The Lord of all the worlds

He has no partner nor parallel whatsoever, and I have been ordered as such, and I am from those who embrace Islam. After reciting the opening prayer (Dua Ifititah), lift your hand to give another Takbir (Allahu Akbar) 7 times. Put your hands back on your chest after every Takbir as per the default standing position in prayer.

It is part of the Sunnah to recite the following in between each Takbir quietly, including after the 7th Takbir:

If one were to become confused about the number of Takbir recited - for example, reciting 8 Takbir instead of 7 Takbir, then it is okay. It is considered as Makruh (disliked), but the prayer is still valid.

If you were to mistakenly jumble up the number of Takbir recited and the number remains unclear, take the smallest number in mind and continue from there.

Or if you were to mistakenly skip all the 7 Takbir and recite Surah Al-Fatihah immediately after the opening prayer (Dua Iftitah), then it is okay to proceed with the prayer as it does not invalidate the Sunnah Aidiladha prayer. Leaving the 7 Takbir unintentionally, however, is Makruh (disliked).

On another note, it is also important to clarify that the mentioned 7 Takbir does not include the Takbiratul Ihram (Opening Takbir). Once all the 7 Takbir have been made, recite the Ta’awwudz (seeking refuge in Allah s.w.t):

I seek refuge with Allah from the accursed Shaytan

And then read Surah Al-Fatihah:

In the name of God, The Most Compassionate, The Most Merciful.

Praise be to God, Lord of all the worlds.

The Compassionate, the Merciful. Ruler on the Day of Reckoning.

Guide us on the straight path,

the path of those who have received your grace; Say Allahu Akbar (Takbir) during the transition from standing to bending for Ruku’, while raising your hands just as previously explained. Lower your hands gently to your knees as you move towards the Ruku’ position.

Glory be to Allah, the Mighty, and praise be to He

Stand in the upright position - I’tidal

After completing the Ruku’ position, return to the standing position while raising your hands just as in the Takbir position and recite during the transition:

Allah has heard the one who praised Him

Lower your hands gently to your sides. When you are in the complete upright position, recite:

O Our Lord, to You are all the praises

Go into prostration while saying the Allahu Akbar. Let your knees touch the ground first, followed by your palms and then your forehead. While in the first Sujud, recite three times:

Glory be to my Lord The Most High, and praise be to He

Sit on your knees

O Lord, forgive me, have mercy on me, cover for me my shortcomings, elevate my rank, provide for me, guide me, grant me well-being, and pardon me

Afterwards, return to the prostration position to complete the second Sujud and repeat the recitation as mentioned previously.

Upon fulfilling the mentioned steps, you have completed the first raka’at.

7) Return to the standing position - Give 5x Takbir Return to the standing position while saying Allahu Akbar (Takbir). Begin the Second raka’at with another 5x Takbir just as explained in step No. 4. In between each Takbir, recite: After reciting Surah Al-Fatihah and then followed with another Surah from the Quran, repeat the steps mentioned in step No. 6 to complete the second raka'at. 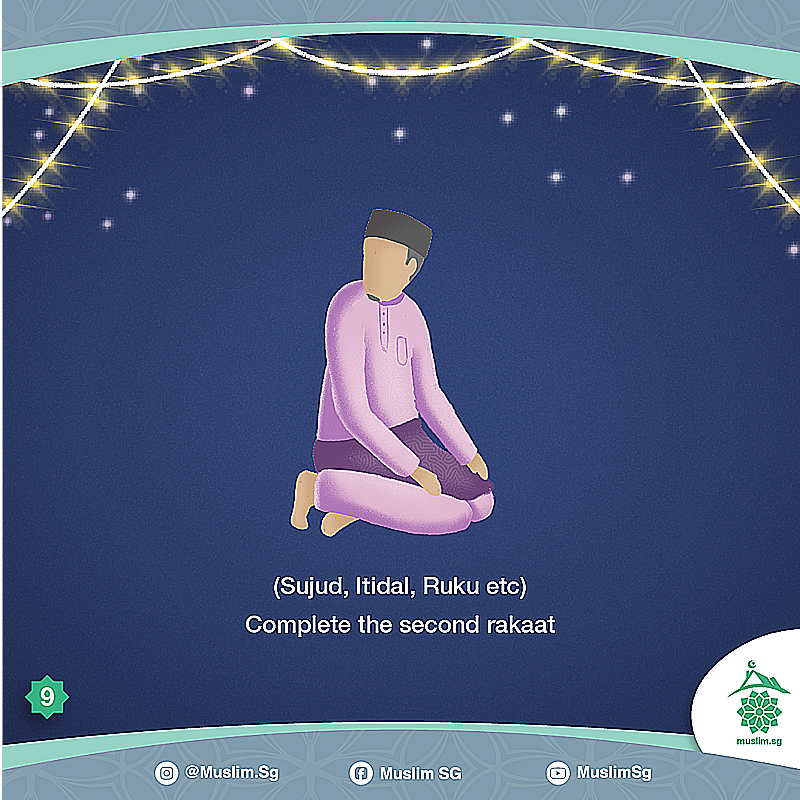 Complete the prayer by reciting the final Tasyahhud:

Continue with the selawat:

End with the Salam

Turn your head to both of your sides, starting from the right, such that your cheek can be seen by anyone behind, and say

Peace and Allah’s mercy be upon you

10) Listen to the Aidiladha Khutbah

Once you have performed your Aidiladha Sunnah prayer, you may listen to the Hari Raya Haji khutbah by Mufti Dr Nazirudin Mohd Nasir.

The khutbah (with English subtitles) will be available at SalamSG TV YouTube at 7.40am. The sermon in Bengali will also be broadcasted on SalamSG TV at 8.40 am. Sign language interpretation will be provided.

With its highly regarded merit in the sight of Allah s.w.t. and the joyous spirit of Aidiladha, we pray that all our humble deeds and sacrifices will be accepted by Allah s.w.t.