Dua for sick person in hospital in English

Dua for sick person in English with transliteration 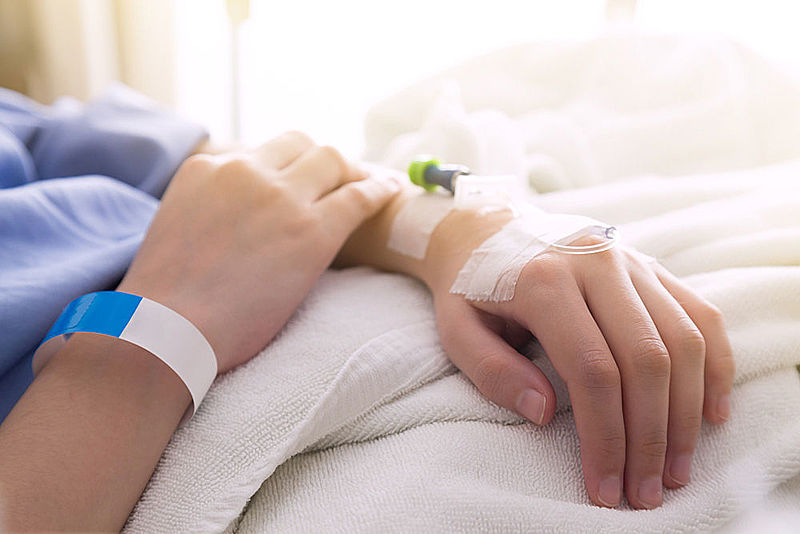 The Prophet s.a.w. taught us to take care of our health and well-being. Despite putting in our best efforts to live healthily and avoid illnesses, we may fall sick at times for several reasons, including the weather, allergies and many more.

It is tough being ill but Prophet Muhammad s.a.w. has reassured us that Allah will expiate some of the sins of a sick person. Abu Sa’eed al-Khudri and Abu Hurayrah r.a. reported that the Prophet s.a.w. said:

No tiredness, exhaustion, worry, grief, distress or harm befalls a believer in this world, not even a thorn that pricks him, but Allah expiates some of his sins thereby.

Prevention is better than cure. However, when we do fall sick, we need to find the best cure. The Prophet s.a.w. said:

Allah has sent down the disease and the cure and has made for every disease the cure.

On top of seeking medical treatment, we need to seek help from Him, for indeed He is The One who can cure illnesses and save us from any harm.

Here are some Duas that we can recite when we are sick and when visiting the sick:

Of course, when we are ill, we should seek medical attention - but we can also pray to Allah s.w.t. to help with our recovery. 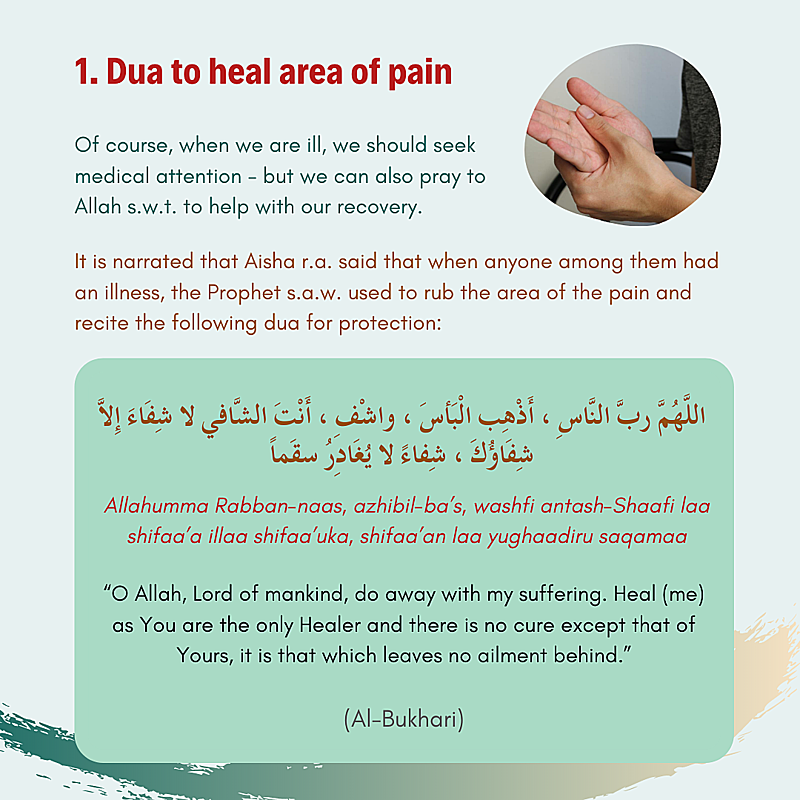 It is narrated that Aisha r.a. said that when anyone among them had an illness, the Prophet s.a.w. used to rub the area of the pain and recite the following dua for protection:

“O Allah, Lord of mankind, do away with my suffering. Heal (me) as You are the only Healer and there is no cure except that of Yours, it is that which leaves no ailment behind” 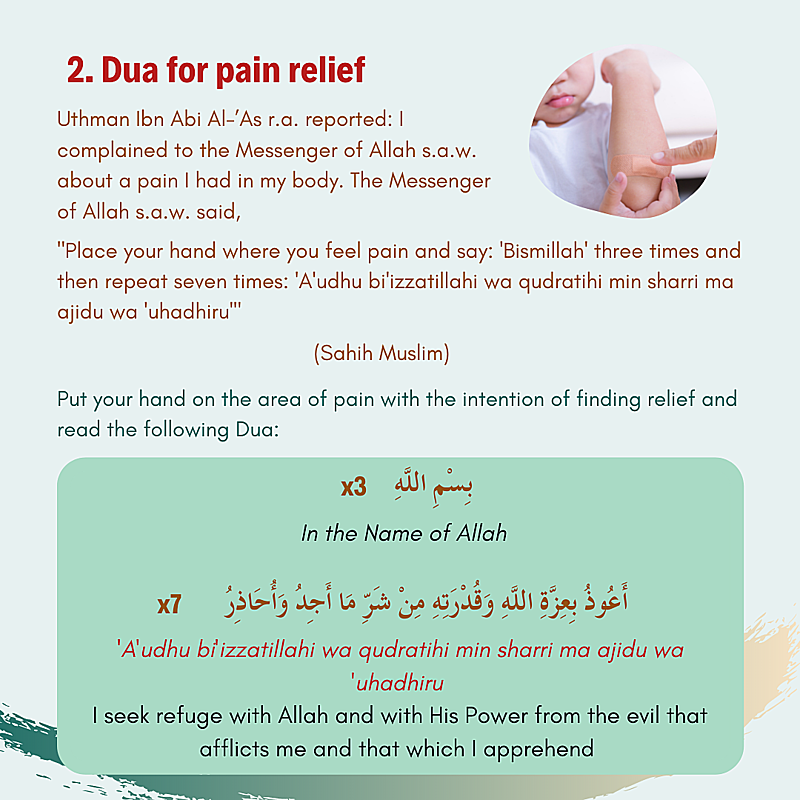 Uthman Ibn Abi Al-’As r.a. reported: I complained to the Messenger of Allah s.a.w. about a pain I had in my body. The Messenger of Allah s.a.w. said, "Place your hand where you feel pain and say: 'Bismillah (In the Name of Allah)' three times; and then repeat seven times: 'A'udhu bi'izzatillahi wa qudratihi min sharri ma ajidu wa 'uhadhiru (I seek refuge with Allah and with His Power from the evil that afflicts me and that which I apprehend)."

As we put our hand on the area of pain with the intention to find relief, recite the following:

In the Name of Allah

I seek refuge with Allah and with His Power from the evil that afflicts me and that which I apprehend.

3) Dua for a sick person 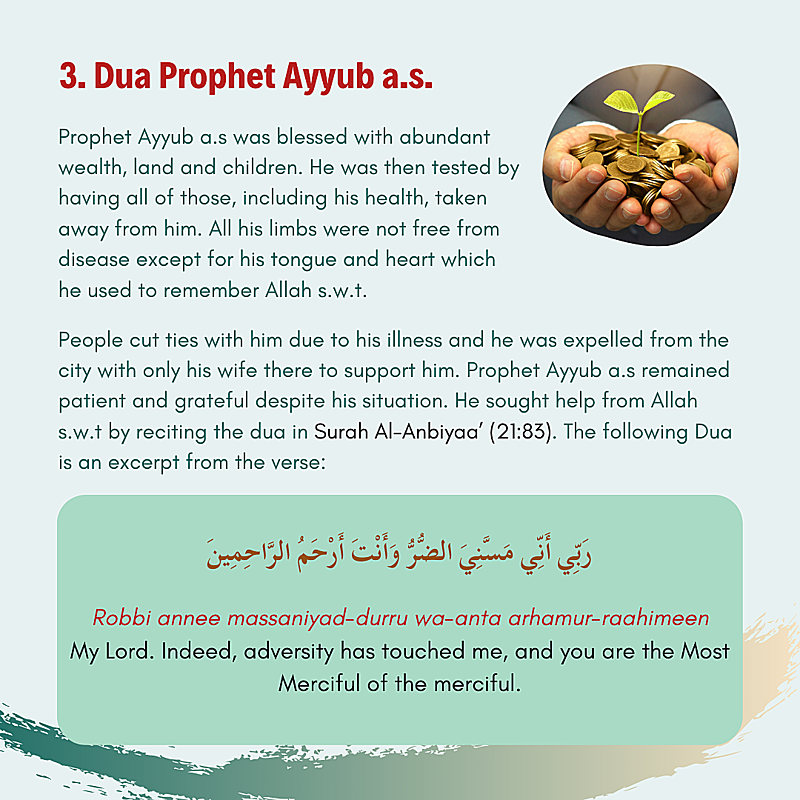 Prophet Ayyub a.s was blessed with abundant wealth, land and children. He was then tested by having all of those, including his health, taken away from him. All his limbs were not free from disease except for his tongue and heart which he used to remember Allah s.w.t.

People cut ties with him due to his illness and he was expelled from the city with only his wife who was there to support him. Prophet Ayyub a.s remained patient and grateful despite his situation. He sought help from Allah s.w.t by reciting the dua in Surah Al-Anbiyaa’ (21:83). The following Dua is an excerpt from the verse:

My Lord. Indeed, adversity has touched me, and you are the Most Merciful of the merciful. 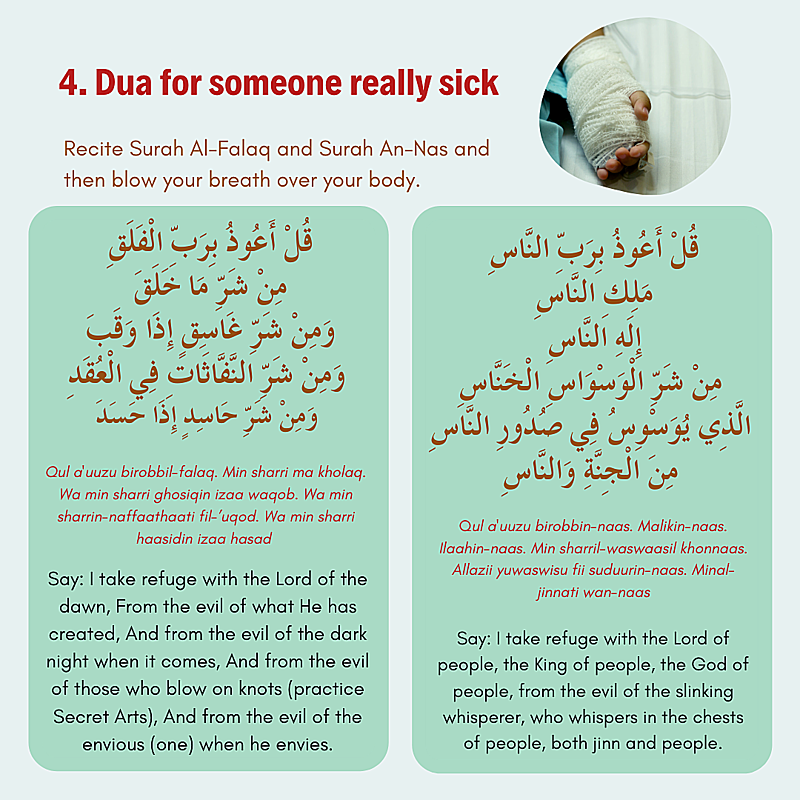 When we see our sick child, mother and loved ones, it's normal to feel helpless and sad. However, do try to remember that Allah is Ash-Shaafee (The One who cures, The Healer).

Aisyah r.a. reported that: Whenever Allah's Messenger s.a.w. became sick, he would recite the Mu'awwidhatayn (Surah Al-Falaq and Surah An- Nas) and then blow his breath over his body. When he became seriously ill, I (Aisyah r.a.) used to recite (these two Surahs) and rub his hands over his body hoping for its blessings.

Say: I take refuge with the Lord of the dawn,

From the evil of what He has created,

And from the evil of the dark night when it comes,

And from the evil of those who blow on knots (practice Secret Arts),

And from the evil of the envious (one) when he envies.

Say: I take refuge with the Lord of people,

the King of people,

the God of people,

from the evil of the slinking whisperer

who whispers in the chests of people

both jinn and people

5) Dua for mercy, forgiveness and healing of pain 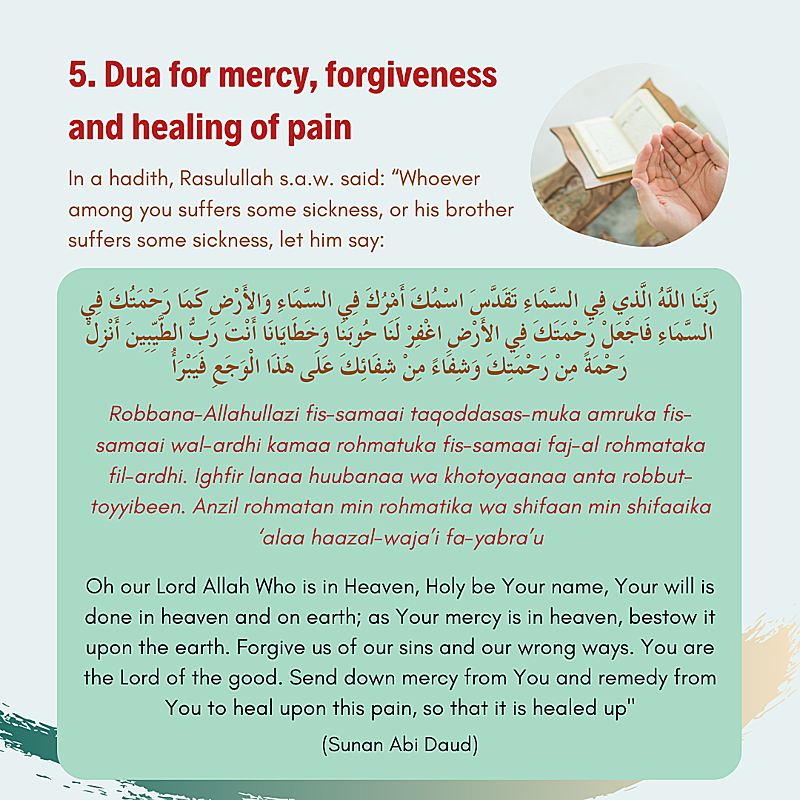 Oh our Lord Allah Who is in Heaven, Holy be Your name, Your will is done in heaven and on earth; as Your mercy is in heaven, bestow it upon the earth. Forgive us of our sins and our wrong ways. You are the Lord of the good. Send down mercy from You and remedy from You to heal upon this pain, so that it is healed up”

6) Dua when visiting the sick 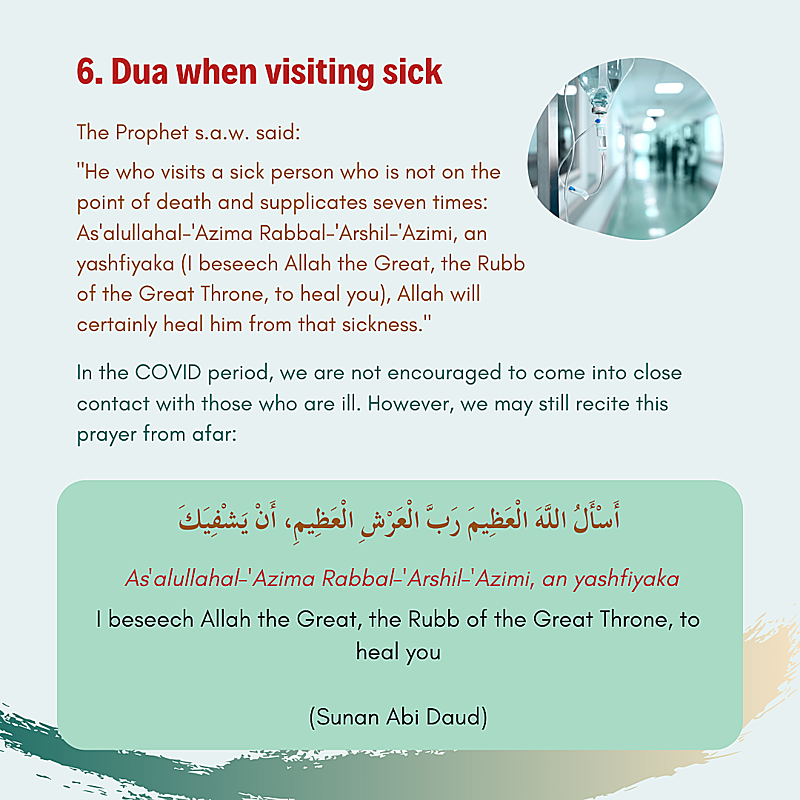 In this COVID-19 period, we are not encouraged to come into close contact with those who are ill as there is a possibility of carrying the virus and spreading it to other people. However, we may still recite this prayer from a safe distance.

"He who visits a sick person who is not on the point of death and supplicates seven times:

(I beseech Allah the Great, the Rubb of the Great Throne, to heal you),

Allah will certainly heal him from that sickness."