How To Perform Aidilfitri Prayer At Home - Step by Step Guide 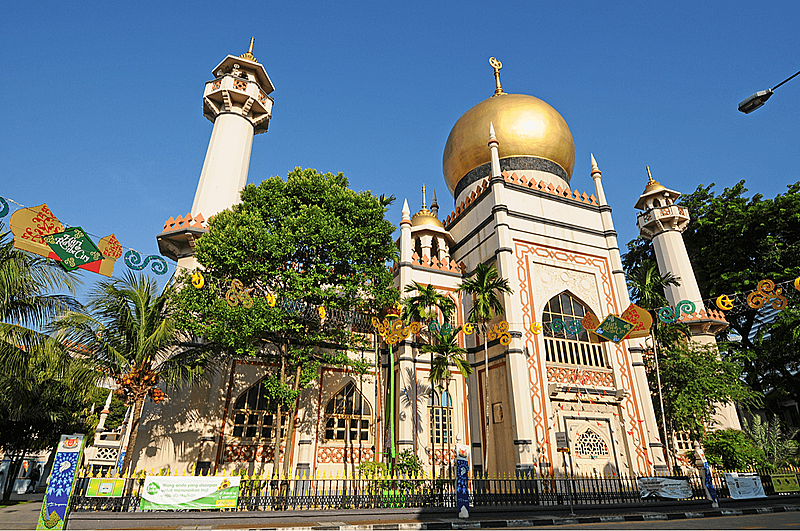 How to perform the Aidilfitri prayer at home

Alhamdulillah for another opportunity to celebrate Hari Raya Aidilfitri. Also known as Hari Raya Puasa, it is a day of victory for us after striving to be the best version of ourselves spiritually, physically and socially with perseverance, hope and faith.

Unlike the previous years since the pandemic, we are now able to return to mosques for the Sunnah Aidilfitri prayer, despite measurements still in place. This is due to the patience and diligence of our community in ensuring that the situation does not worsen throughout the past two years. All of this was undertaken while the spirit of our religious observances continues to be enlivened and experienced together.

The joyous ambience of Aidilfitri is still here with us through the blessings attained from the month of Ramadan. It is the spirit of victory over the baser self that we have strived against as we develop virtuous and praiseworthy traits in the sacred month. In fact, this year, we are also able to visit our relatives.

For many of us who are unable to join the congregation at the mosque for the Sunnah Aidilfitri prayer, we can still observe it in congregation with our family members or individually and intimately by ourselves in the comfort of our own homes.

The Sunnah Aidilfitri prayer, also known as Solat Raya, is a highly recommended prayer (Sunnah Muakkadah). According to scholars, it is considered to be one of the most highly regarded among other Sunnah Prayers (Nawafil). Rasulullah s.a.w. never missed performing this prayer since it was established for Muslims to perform.

The period to perform the Sunnah Aidilfitri prayer is on the first day of Syawal when the sun has completely risen at about 30 mins after Syuruq (Sunrise), which is around 7:30 am, and ends with the Zohor prayer time.

Here is a step-by-step guide to performing the Aidilfitri Sunnah prayer:

Recite the intention for the Aidilfitri Sunnah prayer:

If you are praying in a congregation, the intentions for Aidilfitri prayer are as follows.

The one who is leading the prayer as an Imam would recite:

The Makmum (follower) will recite this intention:

I intend to pray the Sunnah prayer of Aidilfitri as the Ma’mum (follower), two raka'at for Allah ta'ala The following illustrations will guide you in praying Jema’ah (in a congregation) at home:

Read these guidelines for praying in a congregation.

Say ‘Allahu Akbar’ while keeping your intention in mind.

3. Place your right hand over your left and recite Dua Iftitah Upon giving the Takbir, lower your hands gently over your chest and put your right hand over your left.

Recite the Dua Iftitah (opening dua) quietly only for the first raka’at:

Allah the Almighty, the Greatest

All praises be upon Him

Allah The Most Exalted of them all, day and night

Indeed my Solat, my good deeds, my life and my death are all for Allah The Lord of all the worlds

He has no partner nor parallel whatsoever, and I have been ordered as such, and I am from those who embrace Islam.

After reciting the opening prayer (Dua Ifititah), lift your hand to give another Takbir (Allahu Akbar) 7 times. Put your hands back on your chest after every Takbir as per the default standing position in prayer.

It is part of the Sunnah to recite the following in between each Takbir quietly, including after the 7th Takbir:

If one were to become confused about the number of Takbir recited - for example, reciting 8 Takbir instead of 7 Takbir, then it is okay. It is considered Makruh (disliked), but the prayer is still valid.

If you were to mistakenly jumble up the number of Takbir recited and the number remains unclear, take the smallest number in mind and continue from there.

Or if you were to mistakenly skip all the 7 Takbir and recite Surah Al-Fatihah immediately after the Takbiratul Ihram, then it is ok to proceed with the prayer as it does not invalidate the Sunnah prayer. Leaving the 7 Takbir unintentionally, however, is Makruh (disliked).

On another note, it is important to clarify that the mentioned 7 Takbir does not include the Takbiratul Ihram (Opening Takbir). 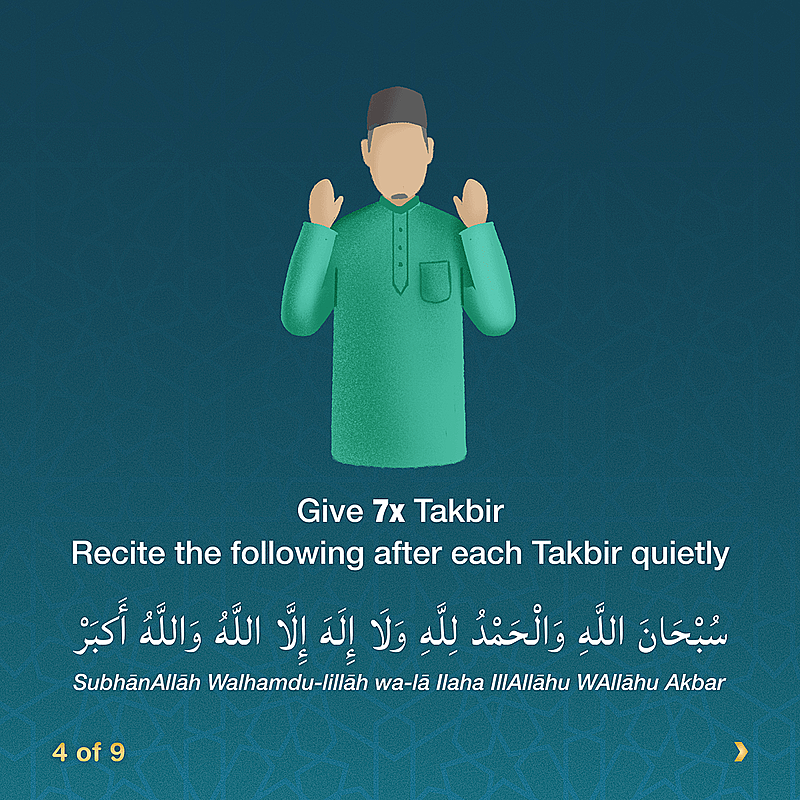 5. Recite Surah Al-Fatihah and another Surah from the Quran

Once all the 7 Takbir have been made, recite the Ta’awwudz (seeking refuge in Allah s.w.t) quietly:

I seek refuge with Allah from the accursed Shaytan

And then read Surah Al-Fatihah:

In the name of God, The Most Compassionate, The Most Merciful.

Praise be to God, Lord of all the worlds.

The Compassionate, the Merciful. Ruler on the Day of Reckoning.

Guide us on the straight path,

the path of those who have received your grace;

Upon completing the recitation of Surah Al-Fatihah, you may read any memorised surah of your preference. For the second raka’at, it is encouraged to choose a verse that does not precede the first in the order of the Quran. For example, you can read Surah Al-’Asr in the first raka’at and read Surah Al-Ikhlas in the second.

Say Allahu Akbar (Takbiratul Intiqal) during the transition from standing to bending for Ruku’, while raising your hands just as previously explained in Takbiratul Ihram. Lower your hands gently to your knees as we move towards the Ruku’ position.

Glory be to Allah, the Mighty, and praise be to He

Stand in the upright position - I’tidal

After completing your Ruku’, return to the standing position while raising your hands just as in the Takbiratul Ihram position and recite during the transition:

Allah has heard the one who praised Him

Lower your hands gently. When you are in the complete upright position, recite:

O Our Lord, to You are all the praises

Go into prostration while saying the Allahu Akbar. Let your knees touch the ground first, followed by your palms and then your forehead. While in the first Sujud, recite three times:

Glory be to my Lord The Most High, and praise be to He

Sit on your knees

O Lord, forgive me, have mercy on me, cover for me my shortcomings, elevate my rank, provide for me, guide me, grant me well-being, and pardon me

Afterwards, return to the prostration position to complete the second Sujud and repeat the recitation as mentioned previously.

Upon fulfilling the mentioned steps, you have completed the first raka’at.

7. Return to the standing position - Give 5 x Takbir

Return to the standing position while saying Allahu Akbar (Takbiratul Intiqal). Begin the Second raka’at with another 5 Takbir (Allahu Akbar) just as explained in No. 4. In between each Takbir, recite: 8. Recite Surah Al-Fatihah and another Surah from the Quran

After reciting Surah Al-Fatihah and then followed with another Surah from the Quran, repeat the steps mentioned in No. 6 to complete the second raka'at.

Complete the prayer by reciting the final Tasyahhud:

Continue with the selawat:

Turn your head to both of your sides, starting from the right, such that your cheek can be seen by anyone behind, and say

Peace and Allah’s mercy be upon you 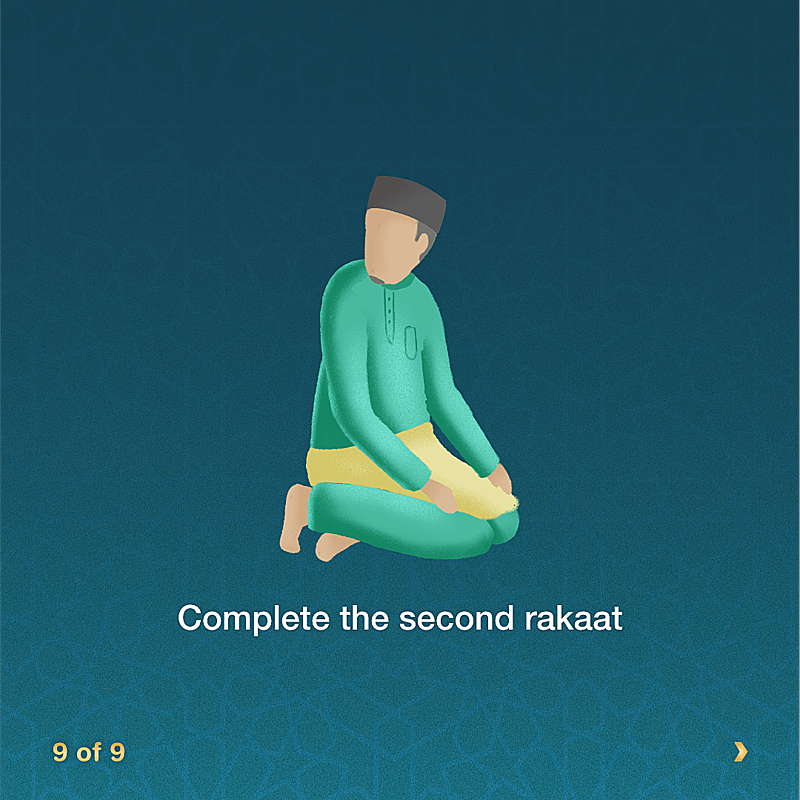 11. Listen to the Khutbah

The Khutbah after the prayer is not part of the Integrals (arkan) of the Aidilfitri prayer like it is for the Friday prayer. It is considered to be a Sunnah (encouraged) in performing the Aidilftri prayer when performed in congregation. Hence, you are not required to deliver the khutbah at home to complete the prayer.

Once you have observed your Sunnah Aidilfitri prayer, you may listen to the khutbah. The khutbah, which will be broadcasted live, is available on SalamSG TV YouTube and Facebook at 7.40 am in Malay with English subtitles.

With its highly regarded merit in the sight of Allah s.w.t. and the joyous spirit of Aidilfitri, may this year's Aidilfitri Sunnah prayer be a more meaningful one. Let us start a new phase of our journey with devoutness to The One who brings glad tidings and victory. 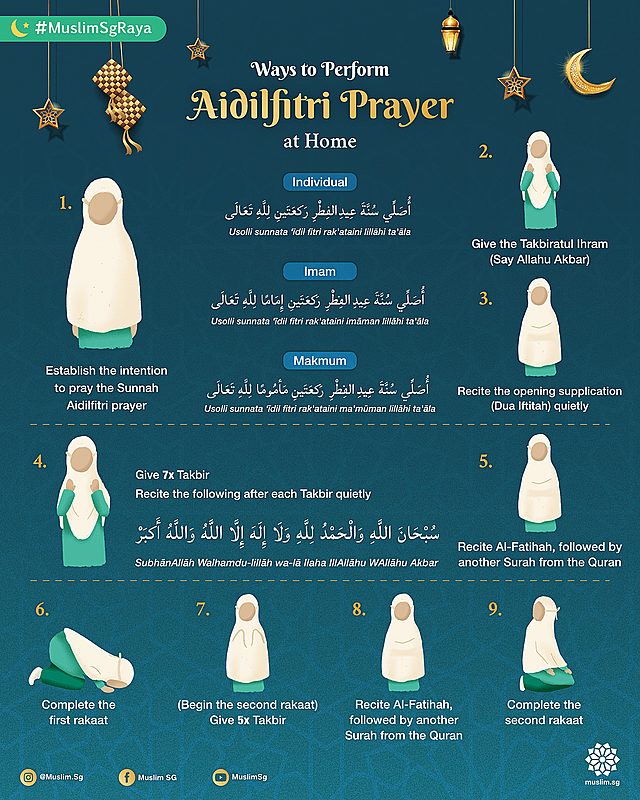