Teachers are special people who dedicate their lives to nurturing their students. They think about us even after school is over. They work hard to prepare engaging lessons. They push us to become who we are meant to be. Here are the top 5 stories that were shared:

Former Lions captain Baihakki Khaizan is a successful football player who reportedly earns a five-figure salary every month. Who would have thought that he used to collect free textbooks when he was young?

In his Teachers' Day message, Baihakki revealed that his Malay teacher and school coach Mr Mohamed Yatim from Jin Tai Secondary School used to give him school necessities such as calculators, art and craft sets and football boots and equipment. He said, "Those things back then costs me a bomb and he provided me quietly without others knowing." Baihakki thanked him for his kind gestures and for being a role model and fatherly figure whom they could share their problems with.

In response, many people joined in to praise Cikgu Yatim as well. 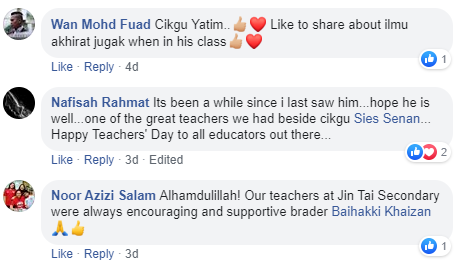 For me, the best part was when someone offered to pass Cikgu Yatim's phone number to Baihakki. 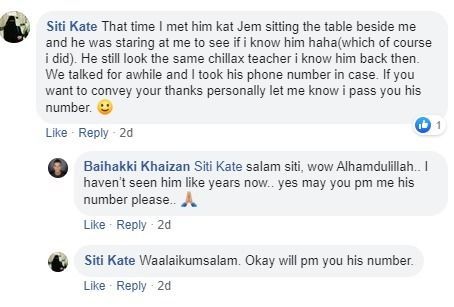 Let's hope that Baihakki gets to reunite with his wonderful teacher!

In his Teachers' Day message, Ustaz Ahmad Faritz (@faaritz) from Asatizah Youth Network talked about how Madrasah Wak Tanjong Al Islamiah shaped not only his academic developments but also his thoughts and the way he reacts to situations. 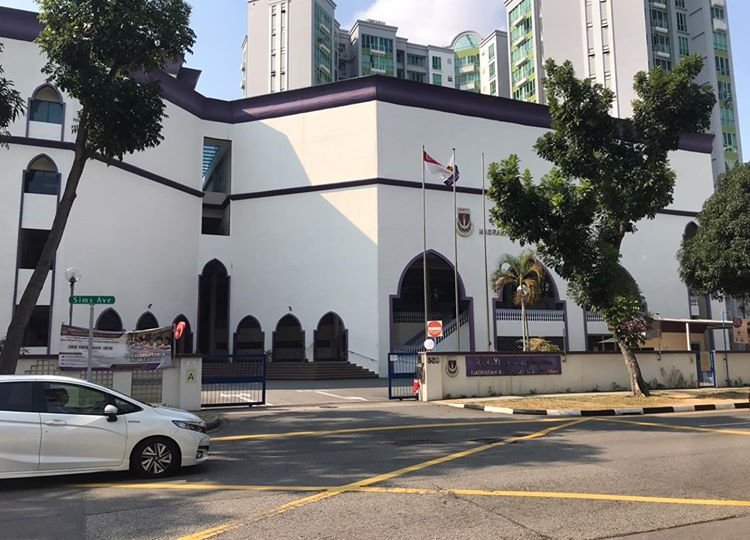 He said,"Definitely my journey back then was not a perfect one but of course a journey that shaped me and taught me to embed good and noble personalities and characters. The school that showed me what its like to be a leader, what its like to treat people with nobility and what its like to potray the best version of a Muslim." Ustaz Faritz expressed his gratitude for meeting his wonderful teachers who showed him not only how to do things correctly but also to how encourage others to follow his example or be better than him.

He said, "They taught me to not only be the best version that I can be but also encouraged others to follow or even being a better version than me. I remembered when my team that represented our school win first place in a competition back then, our Teachers encouraged us to actually share the experience and also train the next team to be as good or even better than us." 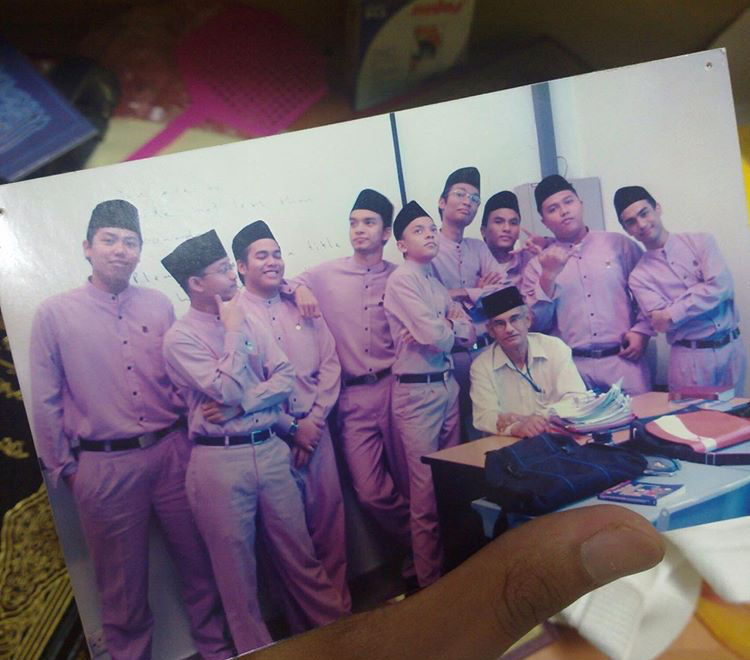 Ustaz Faritz shared that until now, whenever he achieves anything, he feels somewhat obligated to actually share with others and hope that they can be as good or even better.

He writes, "I think when we have the spirit of encouraging others to success, the world will be filled with more positivities and good things. Afterall, the good things will exist like the bad things exist. It will be good if we can be the agents of good and wonderful things." 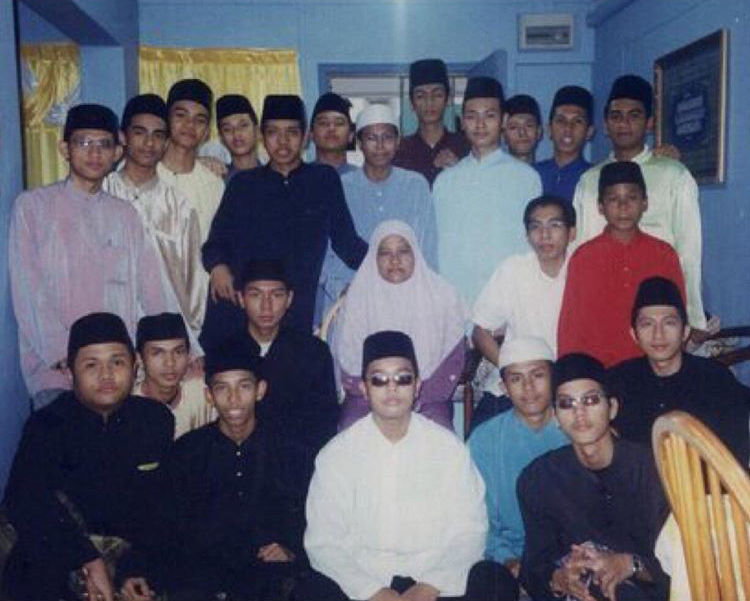 "I feel that one day cannot do justice in honouring the Teachers."

But to make this day worth it, he thanked all the teachers around the world, his teachers including Ustazah Siti Nur Fairuz who is his wife and his first teachers - his parents.

"Please do know that we really cherish and treasure all of you. You are our heroes and definitely without all of you we will not know how beautiful it is to actually contribute and help people to get better in any way."

After spending 12 years of his education at Madrasah Wak Tanjong Al-Islamiah, Ustaz Faritz furthered his studies at Al-Azhar University and was conferred a B.A. in Islamic Jurisprudence. Now, he has come full circle from being a student to being a religious teacher himself. 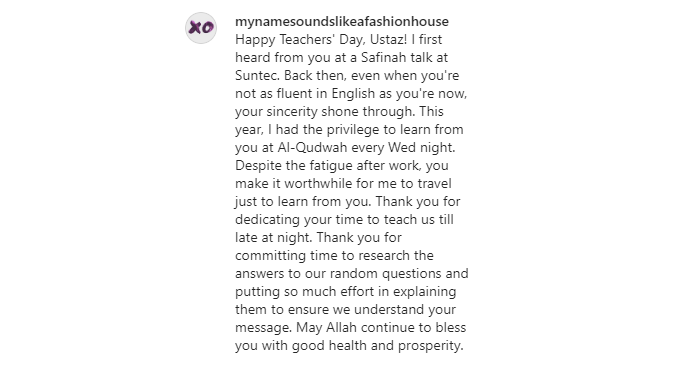 Ustazah Amalina Abdul Nasir transitioned from a madrasah to a mainstream university. She is currently a Research Analyst at the International Centre for Political Violence and Terrorism Research (ICPVTR) at the S. Rajaratnam School of International Studies (RSIS), Nanyang Technological University (NTU), Singapore.

In her Teachers' Day message, Ustazah Amalina (@amalina.abdnasir) thanked Ustazah Norashikin Lan, fondly known as Ustazah Shikin, from Madrasah Al-Maarif Al-Islamiah for imparting one of the most important subjects of knowledge. 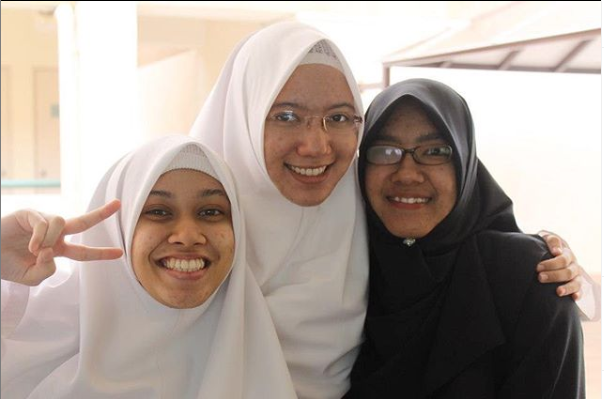 She remarked, "From the moment I graduated from Al-Ma’arif, I found myself constantly referring back to the frameworks that you have taught in class especially when confronted with religious queries. Indirectly, it strengthened my belief. Today, the sense of appreciation is ineffable."

Ustazah Amalina is currently pursuing a Master's degree in Strategic Studies at RSIS, NTU. When she was asked a tough question during one of her modules, she was surprised to find herself mentally teleporting back to what Ustazah Shikin relayed in class about Maqasid Syari’ah. Because of Ustazah Shikin's lessons, Ustazah Amalina was able to respond confidently.

"Your effective teaching methods enhanced my analytical thinking skills and contributed to who I am today. I feel indebted and forever grateful that He chose you to be one of my educators. I pray that your sincerity, passion and love for this subject will help breed more analytical Muslimah thinkers in the years to come 🌷."

Ustazah Amalina also paid tribute to other asatizah like Ustazah Samiah and Ms Jihadah, her Professors in University like Prof Hiro Saito and her Masters lecturers like Prof Bernard Loo.

"They impacted me in different way and they, too, taught me how to bring value to others, sincerity and selflessness. The wisdom we get from them, the educators, are gems that we will never get to attain from any other sources."

I couldn't agree more. May Allah s.w.t. reward our teachers, asatizah, scholars and ulama with the best of rewards and may we be among those who attain knowledge and spread knowledge. Amin.

Join our mailing list
SUBSCRIBE
Related Articles
3 Lessons for the Soul From Surah Al-Fil (The Elephant)
Ustaz Ahmad Helmi
Islamic Quotes On Death: The Idea of Mortality in Islam
Muslim.Sg
Following The Legacy of Our Local Scholars: Almarhum Ustaz Syed Ahmad Semait
Ahmad Ubaidillah
5 Things You May Not Know About Our Mufti
Ustaz Ridhwan Mohd Basor