COVID-19 is a global pandemic. The Muslim community is not spared from this virus.

Here are some of the religious advisories and directives issued for Muslims:

The fatwa issued by the Fatwa Committee in Singapore dated 12 March 2020 decreed that local mosques are closed down and Friday prayers are suspended until 26  March 2020. All congregational prayers, religious classes and events are to be suspended as well.

More information on the fatwa can be accessed here. If you need to know what it means, you may also read a related article on Suspension of Friday Prayers and Closure of Mosques Due to COVID-19: Here's What That Means

Beyond the closure of the mosques and suspension of Friday prayer, Muslims in Singapore have also been advised not to shake hands, and to bring personal prayer mat for prayer at mosques when the mosques are no longer closed. They are also advised to take care of personal hygiene and to ensure they do not go to the mosque if they are unwell. 2. Suspension of Mosques and Congregational Prayers in Malaysia

The Malaysian government issued a restriction movement order in Malaysia for ten days starting from 18 March 2020. During this period, all houses of worship, including mosques to be closed and no prayers including Friday prayers to be conducted. Muslims, together with other Malaysians are advised to stay at home and not to go out unnecessarily.

Earlier, the Islamic religious authority of Perlis had already issued a directive for the suspension of Friday prayers across all mosques since 13 March 2020. In other parts of Malaysia, mosques continue to be opened but the duration for the Friday prayers was shortened and those who are unwell are excluded from entering the mosques.

In Pulau Penang, its Mufi, Datuk Seri Dr Wan Salim Wan Mohd Noor suggested that the Friday prayers could be suspended if the situation necessitates such measures. This view was also echoed by the Minister of Religious Affair, and the former Mufti of Federal Territories, Dr Zulkifli Albakri. Sheikh Abdullah Bin Bayyah who currently chairs the fatwa committee in UAE published a fatwa to address the issue of COVID-19. We share with you his fatwa here:

(a) It is obligatory according to the religion, for all groups and members of the community to fully comply with all health advisories and instructions given by experts and authorities, in addition to taking all the right measures to prevent the spreading of the disease. It is not permissible according to religion, to violate the given instructions.

(b) It is not permissible, according to the Islamic faith, for those who are inflicted with the disease or potentially carry the symptoms, to be in public spaces or to be in Mosque for congregation or Friday or Eid prayers. It is compulsory for the person to take the right preventive measures such as staying in a quarantine room and observing the right medical care determined by the health advisories from the authorities.

(c) People who are under the categories of senior citizens, the young ones, and those who have respiratory illnesses, and those who are showing symptoms of illness and those who are having low immunity - they are allowed to be absent from congregational prayers, including  Friday,  Eid and Terawih prayers. They should be observing their prayers at home and praying the Zuhur prayer instead of the Friday prayers.

(d) Specifically regarding the Umrah (minor pilgrimage), Hajj or visitation to Madinah; It is obligatory to observe all the measures issued by the Kingdom of Saudi Arabia, based on its sovereign and legal responsibility to care for pilgrims and visitors.

(e) It is obligatory, according to the religion, for all groups to cooperate with the experts and provide the necessary support - to stop the spreading of the disease, to eradicate it and to prevent from the spreading of fake news by discerning it from official statements as announced by authorities.

(f) Offer sincere assistance and help to all groups and individuals with their respective skills (specialisation), and to avoid exploiting trialled conditions to increase profit, especially in pharmaceutical and medical appliances.

Sheikh Abdullah bin Bayyah then mentioned the evidence and sources from the Tradition, and ends with a reminder to make lots of prayers and to seek forgiveness from Allah s.w.t. Seeking forgiveness lifts away afflictions and increases strength, as seen in the verse:

“And O my people! Seek your Lord’s forgiveness and turn to Him in repentance. He will shower you with rain in abundance, and add strength to your strength.”

You can read more on this fatwa here.

Dar Al-Ifta Al-Misriyyah is the council of fatwa in Egypt. In discussing COVID-19, the published this advisory:

(a) Muslims should not be overwhelmed by fear and intense panic from the trials that may afflict him or those around him. He must in fact, have good perception towards Allah and have faith that Allah will save us from this affliction.

(b) If one is afflicted with the disease, he must be patient and take the right medical treatment, and to know that his patience will be a cause to the expiation of his bad deeds.

(c) The believer’s response in times of trials is to constantly do remembrance of Allah (Zikir) and supplicate (Dua). The Prophet s.a.w advised us to read A’uzu bikalimatillahi tammati min syarri ma kholaq - I seek refuge in the perfect words of Allah from the evil of what is created” three times in the morning and evening.

(d) Muslims must comply with all preventive and medical measures given by experts and authorities. This is part of Ihsan - Do not contribute to your destruction with your own hands, but do good, for God loves those who do good (Surah al-Baqarah, 2:195)

You may read more here.

In addition to the official advisory, one of the fatwa consultants of Dar Al-Ifta’, Sheikh Fahmy Abdul Qawiy provided this advisory:

(a) It is enough to greet with “Assalamualaikum wr wb - Peace be upon you”, and  there is no need to shake hands.

(b) Muslims must cooperate, understand and comply with instructions from the authorities and credible institutions.

(c) Those partaking in congregational prayer must bring a small prayer mat or a handkerchief especially for the ‘Sujud’.

(d) Those leading the prayers at Mosques (Imams), are advised to be brief in their Sujud and not to prolong it.

He then reminds us to have certainty and faith that there is Allah who creates and wills. You can read more here.

Dar Al-Ifta’ also posted on its official Twitter account that it is permissible to perform the prayer only at our homes in times of natural disasters such as storms or pandemics (infectious disease), but it becomes compulsory (to pray at homes) if the authorities issued such a directive

You can read more here.

Saudi Arabia announced on 17 March 2020 that all mosques will suspend congregational prayer, including Friday prayer, except for Masjidil Haram in Makkah and Masjid Nabawi in Madinah. Azan will continue to be broadcasted from the mosques.

However, on 20 March 2020, entrances to Masjidil Haram and Masjid Nabawi have been locked from the public.

Therefore, Muslims in Saudi Arabia are to not to visit the mosques and to pray at their homes during the period of mosque suspension.

Earlier, the Umrah pilgrimage has been halted and Saudi authorities have suspended flights to the Kingdom. 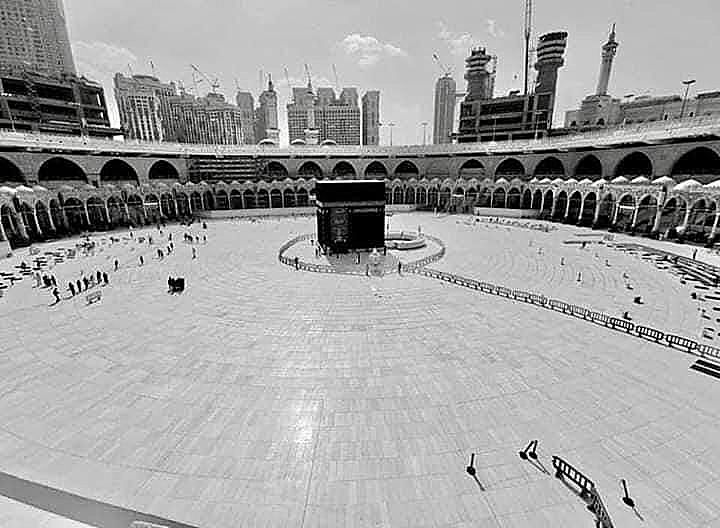 The Tajikistan authority called for its citizens to avoid going to mosques for Friday prayers as a precaution against the spread of COVID-19 although they have yet to have any confirmed cases. You may read more here.

7. Advisory by Imam Suhaib Webb of the United States

Suhaib Webb advised the Muslim community, particularly in the US, to stay in touch with their local public health providers, Imams, and Fiqh councils.  He is calling for the suspension of Friday prayers and large gatherings especially if public health officials warn against them and if requested by the local authority. You can read more here.

In making sense of what is happening, it is important that we are aware that nothing happens without the knowledge, creation and will of Allah s.w.t. In addition to the social and religious directives, scholars have also advised us to return to Allah s.w.t especially more so in times of adversities. This is then a good opportunity for us to seek repentance.

On the other hand, this is also a good time to stand together as a united community that brings benefit to others regardless of faith, in the name of humanity. The Prophet s.a.w, after all, is a blessing to all.

May Allah s.w.t. enable us to find the vaccine against COVID-19 and keep all of us safe and healthy.

Access the rest of our resources on COVID-19 here.